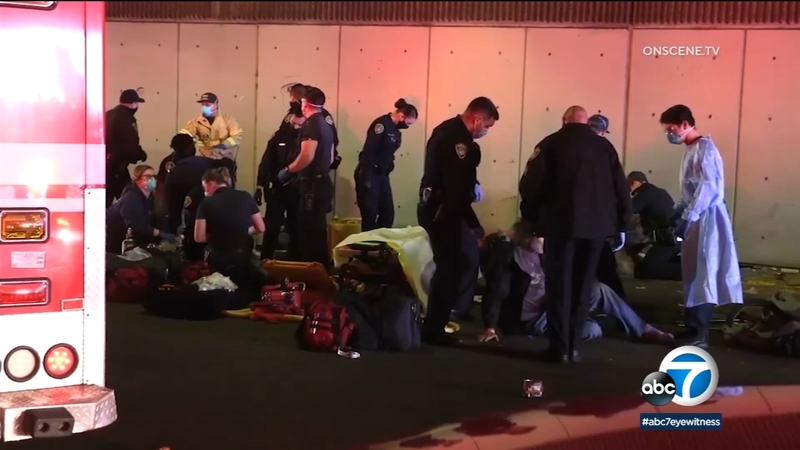 SAN DIEGO (KABC) -- A 71-year-old man has been arrested after his car jumped a sidewalk in San Diego and crashed into a homeless encampment, killing three people and seriously injuring six, authorities said.

The driver, identified as Craig Voss of San Diego, was arrested for three counts of manslaughter, one count of felony DUI and five counts of causing great bodily injury.

Police say Voss' Volvo station wagon jumped the sidewalk and drove through an area with a number of tents under a bridge, hitting nine people in downtown San Diego Monday morning.

Six people were badly hurt in the crash, including two who are in critical condition at a local hospital, said San Diego Police Chief David Nisleit.

Ronnie Williams was one of the people struck.

"He took me at least 20 feet," Williams said. "I was riding on the front of the car. I'm looking back like, are you ever gonna stop? He didn't stop, 'til he pulled off the sidewalk."

Multiple ambulances responded around 9 a.m. to the scene under a bridge near San Diego City College. Video from the scene appears to show that the crash happened near a homeless encampment. The area is usually bustling with students on a typical weekday morning.

"For whatever reason, (the driver) veered to the right, went up on the sidewalk, struck multiple pedestrians there and then came back on to the roadway," Nisleit said

"Crews did the best they could with the resources there. Again, a very tragic emergency and incident that impacts all of us," Stowell said.


The sidewalk had tents on it. Nisleit said homeless people may have moved under the bridge to get out of the rain just before the car plowed through there.

"I don't know if people were sleeping or people were sitting there," he said, adding that authorities scrambling to get people medical help would then turn to finding the answers to those questions.

The driver got out of his car and tried to help people before identifying himself to police, Nisleit said.

"He was cooperative, (and) did not try to run away," the chief said, correcting earlier reports from police that he had tried to flee.

Nisleit said that Voss failed a field sobriety test and officers believe he was impaired at the time of the crash.

Police confirmed that shortly before the crash they received a call about a possibly impaired person driving erratically in the area.

The two victims who were described as being in critical condition were later said to be awake, alert and answering questions, considered a positive sign.

The Associated Press contributed to this report.
Report a correction or typo
Related topics:
san diegocar accidentpedestrian struckpedestrian injured
Copyright © 2021 KABC-TV. All Rights Reserved.
TOP STORIES
LIVE: Brian Laundrie's belongings found during search
Port of Oakland offers to help ease SoCal backlog
Unvaccinated LA city workers may get extension to comply with mandate
Americans arrested for trying to board flight in Switzerland
Man shot during robbery attempt in Beverly Hills
Dog reunited with owner after being taken in car stolen at gas station
Markets and vendors all over Mexico gear up for Día De Los Muertos
Show More
Dodgers seek to even NLCS after rallying for Game 3 victory
Free college proposal likely to be dropped from Biden's spending plan
How to see next meteor shower, full moon, more
These grocery items are about to get more expensive
Missing family's vehicle found in Ohio River after 20 years
More TOP STORIES News