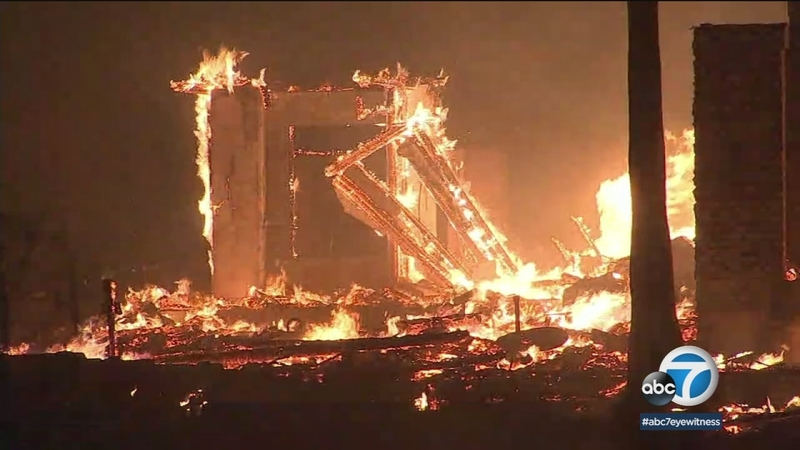 Gov. Jerry Brown declared a state of emergency in the county, in addition to Los Angeles, Ventura and Santa Barbara counties, where other massive brush fires were burning.

Dubbed the Lilac Fire, the blaze erupted shortly after 11 a.m. amid gusty weather just west of Interstate 15 and north of Lilac Road in Pala Mesa near the Fallbrook area.

"Right in front of my house with flames coming down the hill. It had jumped over the hill from south to north - coming right at us," one resident said.

Within an hour, the burn area had grown to about 50 acres, and by 9 p.m., the blaze charred 4,100 acres with 0 containment. The fire was fueled by Santa Ana winds with gusts up to 50 mph.

Cal Fire officials said at least 20 structures were destroyed and hundreds of others remain threatened as the fire grows at a dangerous rate of speed. At least three people suffered burn injuries and one person suffered from smoke inhalation. Several firefighters were also injured fighting the blaze.

Fallbrook residents said they've never seen anything like it. The area, which has seen its own share of destructive fires, affected dozens of people and some said they've gone through the evacuation routine before.

"This happened in 2007, half of the mobile home park where I lived burned down. Valley Oaks. So I've been through this before," Barbara Sacic said.

More than 3,000 people were evacuated in the Bonsall area by 7:30 p.m., covering areas west of South Mission Road, east of Wilshire Road, north of North River Road and south of the intersection of Green Canyon Road and South Mission Road.

Authorities set up an evacuation center for the displaced at Great Oak High School in Temecula and Stagecoach Community Park in Carlsbad.

Jim Peratt was in Las Vegas on business when his wife called and said she was rounding up their two horses and evacuating their property in Bonsall, a community of 4,000 amid the rolling hills of rural San Diego County.

"She saw nothing but smoke and flames all around," Peratt said. "I'm praying I'll have a home when I get back."

As the flames approached the elite San Luis Rey Downs training facility for thoroughbreds, many of the more than 450 horses were cut loose to prevent them from being trapped in their stables if barns caught fire, said Mac McBride of the Del Mar Thoroughbred Club.

"I don't know how many are living and how many are dead," he said. "I guess I'll have to figure that out in the morning."

Most of the horses were saved, McBride said, and were being loaded to go to the Del Mar Fairgrounds.

Cal State San Marcos was closed through Friday, and Palomar College was closed as well. Multiple elementary, middle and high schools were also shuttered by the blaze.

The California Highway Patrol closed down SR-76 from Gird Road to Old Highway 395 and blocked off the latter route between West Lilac Road and SR-76, according to Cal Fire.