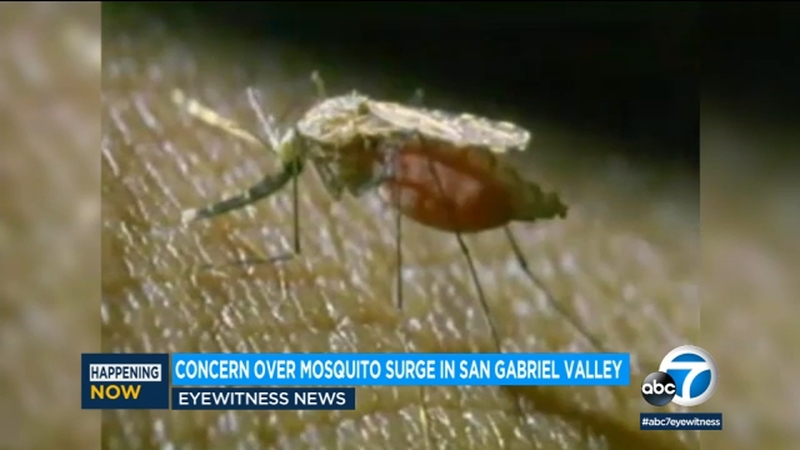 WEST COVINA, Calif. (CNS) -- With temperatures unseasonably high, mosquitoes are descending on the San Gabriel Valley in dramatic numbers, and residents were warned Thursday to take precautions against the bugs that can cause a range of diseases, including West Nile virus.

The average mosquitoes per trap this week was 19.40, the agency said. That compares with 3.14 in 2021 was 3.14. Additionally, more mosquitoes were collected with fewer traps this week compared to the same week in 2021, the SGVMVCD said.

"Temperatures aren't the only highs this week as we buzz into the weekend," said SGVMVCD Vector Ecologist Kimberly Nelson. "Higher temperatures cause mosquitoes to go through their life cycles more quickly."

A heat advisory will be in place until 6 p.m. Sunday for the San Gabriel and San Fernando valleys and the coastal area. All the affected areas could see temperatures into the 90s.

-- Throw out unused containers, as containers left outside can collect stagnant water.

-- Use mosquito repellent, and pick a brand that contains oil of lemon eucalyptus, picaridin, IR3535 or DEET.

"If you're tired of mosquito bites, the best defense is to use mosquito repellent," said Levy Sun, an SGVMVCD spokesman. "Mosquitoes will exist to some degree in our city environments, but we can prevent them from biting us."

Only female mosquitoes bite, piercing the skin and dining on blood. At minimum, their bites can cause itching and skin bumps, but they can also cause serious diseases, the SGVMVCD warns.

In Los Angeles County, the most pervasive mosquito-borne disease threat is West Nile virus, according to the vector agency. Zika, yellow fever and dengue fever also pose an outbreak possibility due to the presence of invasive Aedes mosquitoes, the agency said.

One in five people infected with West Nile, for which there is no cure, will exhibit symptoms that include fever, headache, body aches, nausea or a skin rash. The symptoms can last for several days to months.

Those at greatest risk include seniors and individuals with compromised immune systems. People over 50 years of age and those with chronic health problems are at higher risk of severe illness.

While not all mosquitoes carry the West Nile virus, the type of mosquito that spreads this virus is found throughout L.A. County, according to the San Gabriel Valley Mosquito & Vector Control District.