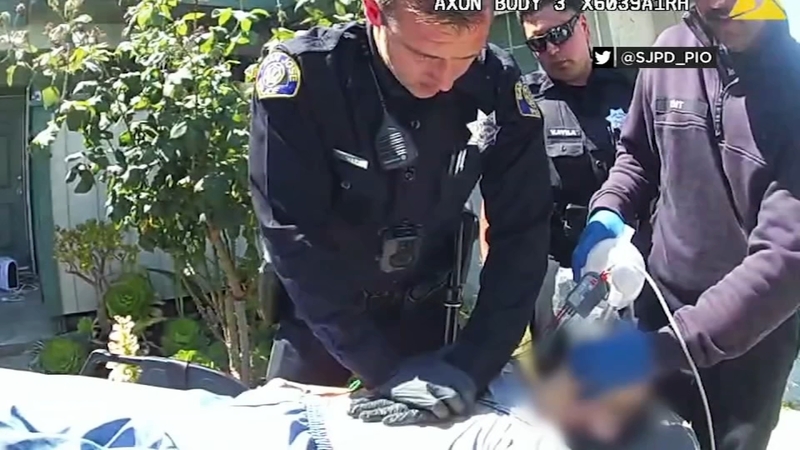 SAN JOSE, Calif. -- Life-saving measures made all the difference during a raging apartment fire in Northern California.

The team of first responders spoke with our sister station ABC7 News, including three San Jose police officers who performed CPR on an unresponsive woman until her pulse returned.

In pictures posted by SJPD, those critical life-saving compressions were captured.

RELATED: Woman shares story of how she rescued farm animals in Vacaville during wildfire

"We took turns because we were doing the CPR for a couple of minutes before the EMS and fire could really get everything together to get her out of here," Officer Chris Reed told ABC7 News.

Officer Reed jumped into action on his seventh day on the job, and still in training.

"I was just hoping that what we were trained to do was gonna work," he added.

Officer Reed said he told the unresponsive elderly woman's pulse did return. Although her current condition is unknown.

After a 60-hour shift, one South Bay firefighter ended up racing to Santa Rosa to help save the home of his girlfriend's parents.

The breakthrough is being hailed as a collaborative effort by several agencies, which includes the San Jose Fire Department.

"If they had not known she was there, if they had not started CPR," Fire Capt. Keith Woeste recalled, "after about two minutes of no oxygen going to the brain, the brain starts to die."

San Jose police Officer Victor Avila was there, with Officer Reed. Avila shared, "We were just doing our best just to get her the help she needed."

He continued, "There wasn't a lot of thought going through- just kind of just action."

That quick action was commended by residents.

"I have never seen a team work as fast as they did," resident Diana Sanchez shared. "And so caring to all of us. For worrying about us."

Sanchez elaborated, "They were coming and asking us, 'Are you guys okay? Do you need anything?' It's like, 'No, do you guys need some water, or something?' Because they're out here busting their butts."

Sanchez and her family live just yards from the destruction. She and others believe a neighbor may have sparked the fire, by smoking near oxygen tanks.

Sanchez described hearing an explosion and thinking, "There's oxygen tanks in there. Combustion. They're gonna blow up... and they all did."

Because of what she witnessed, Sanchez said she and her family are looking to relocate.

"This place went up too fast for it to be safe," she said.

While we await official word on a cause, what's clear is the community also had a hand in helping.

San Jose police Officer Michael Roberson described the scene, "While the neighbors were trying to put out the fire with the hose, we had another explosion, which ended up being oxygen tanks."

An initial explosion woke Joy Torres on Tuesday. She said her concern was escaping safely with her family, which includes her young children and family pets.

RELATED: Good Samaritan jumps into water, saves infant who fell out of a car in Ocean City, Maryland: Police

On Wednesday, she stood just feet from the debris.

"I hope people learn from this incident because so many people lost their homes, and they didn't have to," she said.

She and Sanchez recognizing more damage could've been done, if it weren't for first responders.

Officer Reed shared, "It's something you don't get to do every day, but it's something that officers here at SJPD are trained to do and are ready to do... whenever they need to do it."