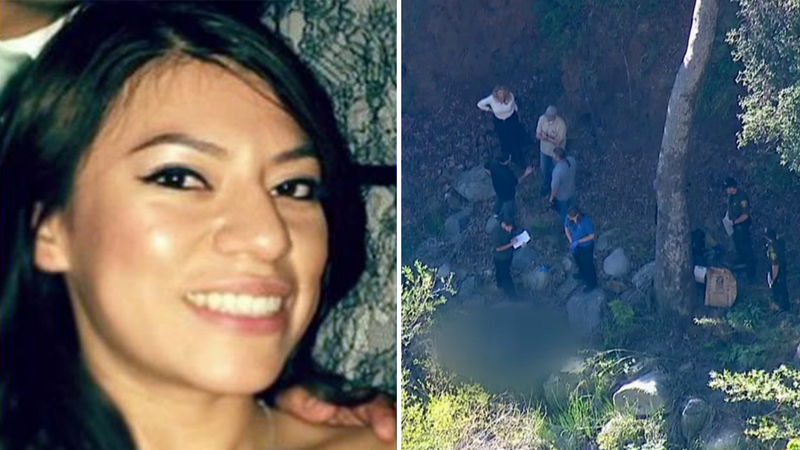 SAN JUAN CAPISTRANO, Calif. (KABC) -- A decomposed body found in a dry creek bed in the Cleveland National Forest near San Juan Capistrano has been identified as Erica Alonso, a Laguna Hills woman who went missing in February.

"On behalf of the family, we want to thank everybody who has helped us," her brother Isaac Alonso, Jr. said.

A group of biologists working for Caltrans made the grim discovery at about 10 p.m. Monday in a remote area one mile east of the San Juan Capistrano Fire-Ranger station near Ortega Highway and Hot Springs Canyon Road. The coroner moved the body at about 11 a.m. Tuesday.

It's not clear how long the body had been there, but AIR7 HD captured what appeared to be blood at the scene.

The cause of death remains unconfirmed. An autopsy was scheduled for Wednesday. Dental and fingerprint records still need to be compared to confirm the identification.

There's "no obvious signs of trauma that we've seen so far, but it's a very preliminary examination of the body," said Orange County Sheriff's Department Lt. Jeff Hallock.

Erica Alonso, 28, of Laguna Hills disappeared on Feb. 15 after she got into a fight with her ex-boyfriend and left his Irvine home in the middle of the night.

Her Honda Civic was found in Aliso Viejo in March, about a mile away from her home, where she lives with her parents. It was unclear how long the car had been sitting in the neighborhood, but sheriff's deputies say they found no useful evidence inside.

Investigators say there was no activity on Alonso's bank accounts or her cellphone since her disappearance, and she had not been on social media, which her family called unusual.

At about 10:30 a.m., Erica Alonso's father showed up at the scene after hearing from friends living in the area that an investigation was underway.

Later, in tears, he said her death was hard to believe.