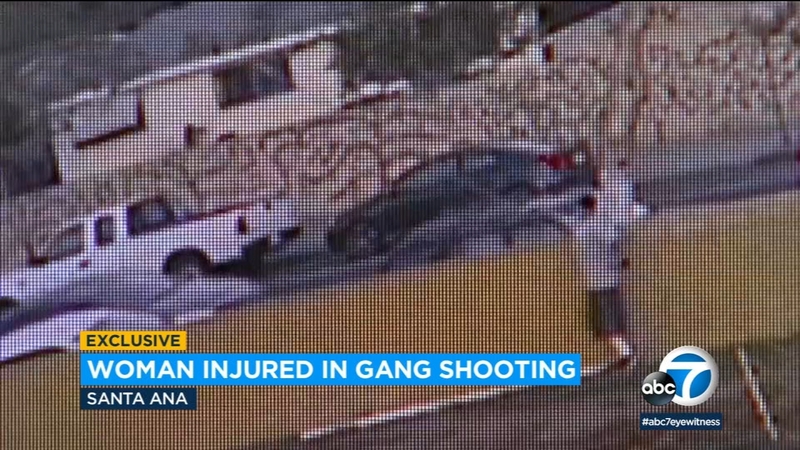 SANTA ANA, Calif. (KABC) -- An innocent victim struck by gang gunfire in Santa Ana is speaking out about the terrifying ordeal.

Surveillance video shows a man on foot behind a wall exchanging gunfire with an SUV driving by on the street near Sullivan Street and Monta Vista Avenue on Dec. 8.

A woman was on her way home from work with her two daughters in the vehicle when she was struck by the gunfire.

The woman spoke exclusively to Eyewitness News, describing in Spanish how the bullet struck her in the upper right part of her body. She felt hot and then saw she was bleeding.

She pulled over and fortunately received help from someone who lived in the area.

"It does appear to be gang-related - gang on gang," said Cpl. Maria Lopez with the Santa Ana Police Department. "Whether the suspect knew the intended target was going to be there in that area at that time - that is information we don't know at this time."

The victim who is too terrified to be identified says she's grateful to be alive and is hoping the gunman and a woman who was also arrested will be held accountable for the callous crime.

"When we do have an innocent victim being struck like we do here then obviously it does raise the level of awareness for us," Lopez said.

The alleged gunman is facing charges that include attempted murder and assault with a deadly weapon.