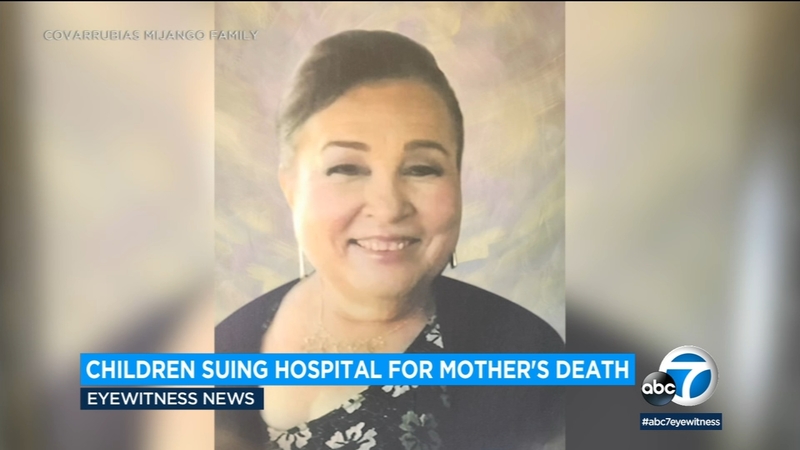 SANTA ANA, Calif. (KABC) -- A family says after their mother beat COVID-19, they found maggots in her nose and mouth while she remained hospitalized. They are holding staff at Santa Ana's South Coast Global Medical Center responsible for the death of their mother.

Carolina Mijango said she and her siblings did all they could to help the nurses treat their mother as she battled COVID-19 in the summer of 2020, taking turns bringing meals and making friends with the staff.

"I ran around so much for my mother and to try to save her," Mijango said. "It felt like a betrayal to that trust because they kept telling me, 'She's OK. She's gonna be OK. We're giving her the utmost care.'"

Finally, at the end of July, Concepcion Covarrubias tested negative for COVID-19. Her children asked to move the 65-year-old to a rehab center, but said their request was denied.

Carolina Mijango said in the weeks that followed her mother's infection levels rose. Carlos Mijango and the rest of Covarrubias' children said the conditions of their mother's makeshift room were unacceptable.

"That to me was not acceptable. Not in America. Not these kind of hospitals," Carlos Mijango said.

Then, during a visit from Concepcion's son and daughter caught on a video call by their sister Carolina, Manuel Mijango said he knew his mother was in pain.

"She was crying and she was going through a lot of pain, and I told my sister 'My mom is not OK at all,'" Manuel Mijango said.

A devastating discovery was caught in the video call. Concepcion's son said he found maggots in his mother's nose and mouth.

"Maggots pumping out of the nose," Manuel Mijango said in tears as he described the larva in his mother's body.

A spokesperson said the hospital is not commenting while litigation is pending.

According to the complaint filed in court, nurse notes state, "two or possibly three dozen maggots started coming out of the patient's right nares."

Her children said their mother was well-loved by everyone, always caring, supporting others - not deserving of this.

"I wouldn't want anybody else to go through the same thing. To be such strong advocates and at the end to feel so betrayed," Carolina Mijango said.

Both parties are scheduled to meet in court in January.