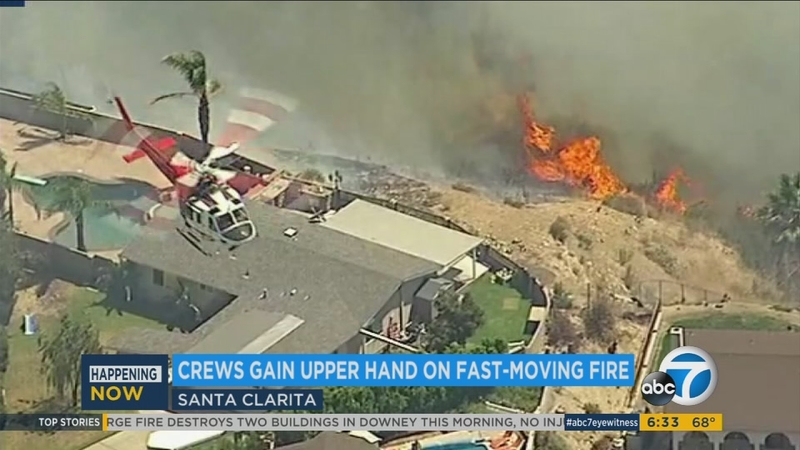 SANTA CLARITA, Calif. (KABC) -- Firefighters are battling a fast-moving brush fire in the Santa Clarita area that burned more than 870 acres Sunday. The blaze prompted a temporary shutdown of Highway 14 and several evacuations.

The blaze was reported about 12:47 p.m. after a vehicle hit a tree in the area of Highway 14 and Placerita Canyon Road, according to the Los Angeles County Fire Department. The flames spread from the crash site to nearby brush.

Santa Clarita residents were shaken by how close the Placerita Fire got to their homes on Sunday.


Due to high winds and scorching temperatures above 100 degrees, the fire pushed out of control, jumping to both sides of the 14 Freeway, fire officials said.

More than 250 personnel were on the scene as the fire remained at 750 acres for a few hours and then spread to 870, according to L.A. County sheriff's officials.

By 4:45 p.m., the northbound side of the 14 Freeway was back open, and the southbound side opened less than an hour later.

The fire remained at 50 percent containment Sunday night into Monday morning. The east side of the fire burned into the Sand Fire area from just one year ago, which helped firefighters gain the upper hand.

At least one structure, described as a "prop" building, was destroyed in the Disney Ranch area, where there was also a power outage as a result of the fire. Sheriff's officials said 76 homes were impacted by the outage.

This fire is insane @ABC7 pic.twitter.com/mIASYnFYqO

Video from AIR7HD showed the fire approaching several homes in the area. One resident was seen gathering water from a pool and using it to douse a nearby hillside.

A local news van was also seen completely charred near the fire. KNBC-TV said in a statement the cause of the van fire was not related to the Placerita Canyon blaze and nobody was injured.

An evacuation center for large animals is at the AV Fairgrounds, located at 2551 West Avenue H in Lancaster.