Hundreds of people were arrested and multiple businesses in Santa Monica were destroyed after mostly peaceful protests turned chaotic over the weekend, police said Monday.
KABC
By Jade Hernandez 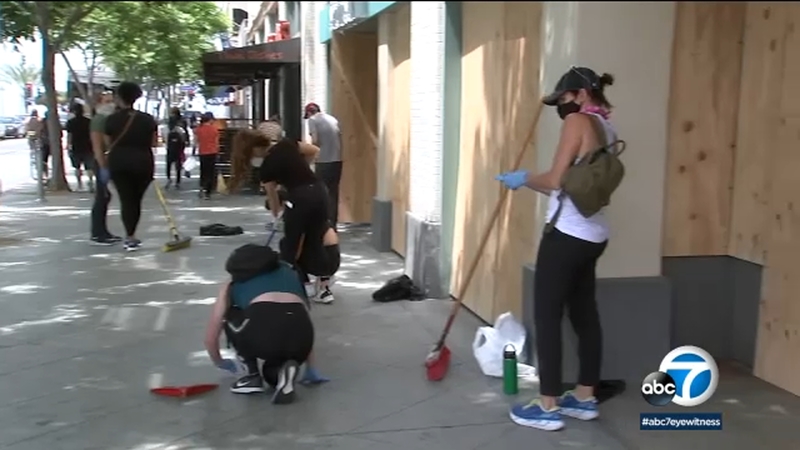 Over 400 arrested after vandals wreak havoc in Santa Monica

SANTA MONICA, Calif. (KABC) -- Santa Monica police said Monday hundreds of people were arrested - a majority of which were not residents - and multiple businesses were destroyed after mostly peaceful protests turned chaotic over the weekend.

Vandals clashed with police officers who deployed tear gas and called in help from the National Guard to disperse the crowd. Groups of people were also seen breaking into stores even as additional curfews were declared.

Santa Monica police said over 400 people were arrested, updating a previous report of 200 arrests. Arrests were made for crimes such as burglary, assault with a deadly weapon, looting and curfew violations, Police Chief Cynthia Renaud said. She added that 95% of those arrested during the looting do not live in Santa Monica.

City officials emphasized that they did not believe most of the looters were associated with the protest.

Trash and shattered glass littered the street and sidewalk near a CVS Pharmacy on Monday, with the metal gate to the front of the store forced open. A Vons was also pillaged, with merchandise scattered across the store and multiple empty shelves.

The city said the Public Works Department will start cleanup Monday morning. The city has received inquiries as to how the community can help with the cleanup process. City officials advised those interested in participating in cleanup efforts to wait until after 9 a.m.

A curfew goes into effect at 1 p.m. Monday for the business district, followed by the citywide curfew at 4 p.m.

Officials condemned the violence by a small group of people as otherwise peaceful demonstrations continued over the killing of George Floyd by a white Minneapolis police officer.

"Sunday was one of the most distressing days in Santa Monica history. We know better than to let the looters obscure the message of the protesters, who have indeed been heard. What a small and selfish criminal element has done instead is to bring our community more closely together. We will support our local businesses to recover from this. Much was lost on Sunday, including property and innocence. As Mayor, I'm grateful that we did not lose any lives," he wrote.

Neighbors were shellshocked by the path of destruction left behind by the violence.

"Very frightening, it was just like mobs of people everywhere. Nobody cared about anything. They took almost everything," one man said. "The local grocery stores. Where are people gonna eat? People still need to eat. I mean, we're just recovering from a major whatever, you know. We're just getting back on our feet and now this. We need to pull together as a community, all one, and say, hey look, we're all sympathetic for what happened. People don't deserve to die, but a lot of people don't deserve to get hurt either."

At least nine fires were set in the city on Sunday - four to buildings, four to cars and one in a dumpster, fire officials said.

People with arms full of boxes were walking quickly away from the area. In some cases, there appeared to be organized groups of people loading cars full of merchandise.

A block away from a large demonstration, looters were seen taking items from stores in Santa Monica.

A group of looters were also seen ransacking an Amazon Prime truck, tossing boxes out of the back of the vehicle.

The looting was happening just blocks away from a large protest on Montana Avenue that was mostly peaceful, although many in the crowd did not disperse when ordered to by police.

Protesters also staged a sit-in, with police setting up a skirmish line around the protesters.

Dozens of looters ransacked stores in Santa Monica on Sunday, leaving behind a trail of smashed glass, overturned racks and blaring alarms.

Santa Monica police said Monday hundreds of people were arrested - a majority of which were not residents - and multiple businesses were destroyed after mostly peaceful protests turned chaotic over the weekend.

Roughly 1,000 guard personnel were deployed after Gov. Gavin Newsom declared a state of emergency Saturday for all of Los Angeles County.

Santa Monica officials imposed a curfew from 4 p.m. Sunday through 5:30 a.m. Monday. Exceptions to the curfew were made for first responders, people going to and from work, and anyone seeking or giving emergency care. All others are said to risk arrest if on the streets during the curfew.

A few hundred people started marching down Ocean Boulevard around noon Sunday, many holding signs protesting the killing of Floyd. That march was peaceful, but a short time later looting was reported at several stores in the popular Santa Monica Place shopping center and on nearby Fourth Street. Video showed many people carrying merchandise and running out of stores that had been broken into.

The 10 Freeway was shut down near its western edge around 2 p.m., backing up traffic to the 405 Freeway.

As the 4 p.m. curfew deadline passed, looting was still going on in and around the Third Street Promenade while police were trying to disperse a separate, peaceful group of demonstrators assembled nearby.

Board of Supervisors Chair Kathryn Barger announced Sunday that she has proclaimed a state of emergency as well, which will facilitate interagency response coordination and mutual aid, accelerate the procurement of vital supplies and enable future state and federal reimbursement of costs incurred by the county.

"This emergency comes as we are in the midst of battling another emergency caused by the COVID-19 pandemic. This taxes our resources, but not our resolve,'' Barger said. We will do everything in our power to keep our communities safe and protect lives and property. I continue to call on our residents to maintain calm and seek solutions productively, not destructively.''

A handful of candlelight vigils and other actions in memory of Floyd were planned Sunday, including a 3 p.m. protest at Long Beach Police Headquarters and vigils in Compton at 6:30 p.m and Pasadena at 7 p.m.

Standing up to looters

Even among the scenes of chaos and looting, there were stories of heroism and people standing up against the looters.

One Santa Monica jewelry store owner said a young woman parked herself on a bicycle in front of his store and may have helped keep troublemakers away.

Bill Bubar of Bubar's Jewelers, a business in Santa Monica for 75 years, says an organized mob tried to break into his store.

"Basically it was a mob out of control," he told ABC7. "They were driving in the middle of the street. They jumped out of cars."

He said one person in the group came over to the store with a baseball bat and tried to smash the door and push the gate in. But the person couldn't get through the gate, he said.

After that first group left, Bubar said, a young woman on a bicycle that he didn't know came by and stayed in front of the store for two hours helping to ward off additional attempts.

"With all of this commotion she stood here and literally I think they left it alone because she was standing in front of the door," Bubar said. "She was really the hero."

He noted that the store's actual jewelry was locked in a safe that the looters likely wouldn't have been able to get into, but they could have done a lot of damage to his equipment, collectibles, mirrors and display cases.

On Saturday, multiple communities in Southern California saw extensive protests, with some of them resulting in violence, including fires and looting. Police struggled to maintain control of the crowds, and the National Guard was ultimately called in overnight to help maintain control in Los Angeles. Almost 400 people were arrested in Los Angeles.