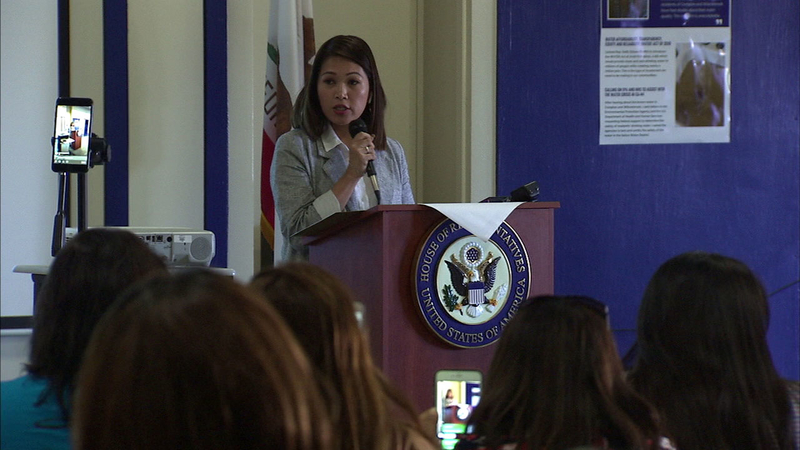 COMPTON, Calif. (KABC) -- The general manager of the Sativa Water District, which has faced criticism for its handling of dirty water in Compton and Willowbrook, was placed on administrative leave.

Maria Rachelle Garza was placed on leave by the board of directors following a closed-door meeting Thursday night.

Garza will remain suspended until an investigation into whether the district paid people to show support for the district during a congresswoman's town hall meeting is over.

The meeting happened Monday and was held by Congresswoman Nanette Barragan. According to the L.A. Times, there are reports that the district paid people to voice their support for the district. The Times interviewed a man who said that before the meeting, the district hired him to put up a Craigslist ad to find paid supporters.

Barragan provided a statement to Eyewitness News over the reports.

"It's disturbing that anyone would feel it necessary to hire paid supporters to dilute the outrage from Sativa customers receiving dirty brown water. We will not be distracted by these alleged tactics and our communities will continue to demand clean water, transparency and accountability," it said.

The water district has faced heavy criticism within the last year over how it has handled murky, smelly water that many residents in unincorporated parts of Compton and Willowbrook receive. Many shared photos and videos of the rust-colored liquid pouring from their faucets.

In April, state officials said the discolored water posed no health risks, but that did not stop residents from complaining and taking action. In mid-May, a recall petition notice was sent to the Sativa Water District board.