Saugus High School shooting: First responder who was off-duty reflects on that day one year later

"Once I saw the victims, I realized that we did have a shooter on campus. There is no way to really prepare when you're in the middle of it, and when you've got students that are victims of gunshots."
KABC
By Carlos Granda 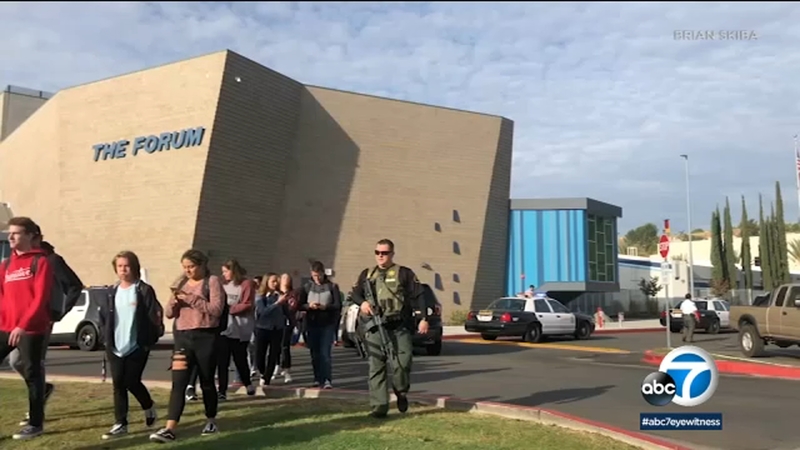 SANTA CLARITA, Calif. (KABC) -- One year ago, there was fear and confusion at Saugus High School in Santa Clarita as shots rang out on campus and students ran for their lives.

Some of the first responders weren't even on duty at the time, but they ran toward the gunfire and, for some, the memories are still painfully vivid.

It had started as just another day for Los Angeles County Sheriff's detective Daniel Finn. He dropped off his girlfriend's son at the school and started to drive away when he saw the commotion.

"(I noticed that) kids were running in all directions. They were running north through the neighborhood, they were running east toward Bouquet Canyon," Finn said. "I was off duty and so I was in plain clothes. I had my pistol with me, I started working my way down to the center of the campus."

A high school student killed two classmates, wounded three others and then shot himself in the head Thursday morning at Saugus High School in Santa Clarita, authorities said.

He says that's when an off-duty Inglewood officer joined him. In the school's quad area, they saw several students on the ground.

"Once I saw the victims, I realized that we did have a shooter on campus. There is no way to really prepare when you're in the middle of it, and when you've got students that are victims of gunshots," Finn said.

First responders had to determine whether or not there was still an active shooter on the scene before they could fully begin the rescue process.

"As it turned out, the shooter was one of the victims at our location. But we didn't know that immediately and, again, we didn't know if they were multiple shooters," he added.

A Saugus High School teacher reflects nearly a year after a school shooting rattled the school.

"What it does illustrate though is the fact that the first responders that arrived we're off-duty deputies," L.A. County Sheriff Alex Villanueva said.

Villanueva said that despite efforts to remove law enforcement from campuses, the shooting showed that they are a needed presence.

The Los Angeles County District attorney's office has reportedly declined to file charges against the mother of the shooter at Saugus High School last year.

"When we have school resource deputies or officers present on campus, that's someone who can respond immediately," he added.

A year later, as he thinks about that day, it is still very difficult for Detective Finn to talk about what happened. He said he did his job, but it was the teachers and the children that did all the right things.