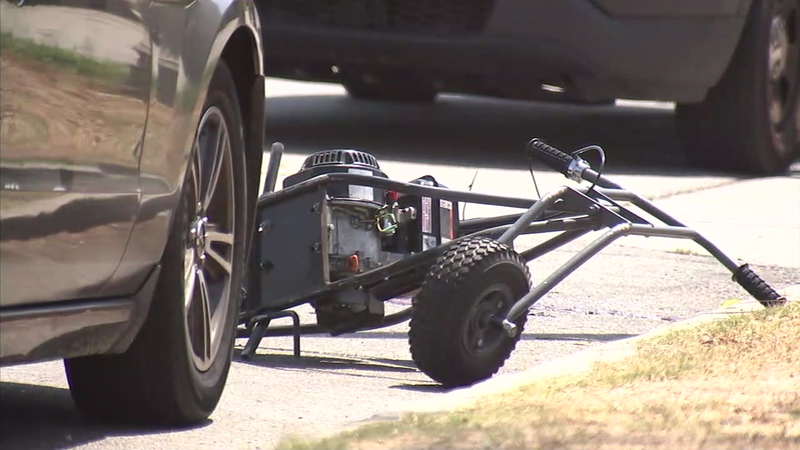 SOUTH LOS ANGELES (KABC) -- A 17-year-old boy was killed and another young man was injured Saturday morning in a crash involving a motorized scooter and a car in the Broadway-Manchester neighborhood of South Los Angeles, authorities said.

The collision happened about 12:43 p.m. in the 200 block of West 92nd Street, according to the Los Angeles Fire Department. A motorized scooter carrying three people on it was struck by a black Lincoln heading southbound on Broadway.

The driver did not see the scooter and the two other passengers on board. The person remained at the scene and cooperated with police.

"The small (mini bikes), they're very low-profile. They can't be seen. Oftentimes, it's a challenge if they're on the roadway. They're not intended to be on the roadway," Sgt. Stacey Spell said.

The father of the 17-year-old boy who died, named Jaylen, said his other son was on the scooter along with a friend. He said his son had asked for a motorized scooter for the holidays, but he'd warned his child that they were too dangerous.

Myron McFrazier said he saw his sons and their friend travel past him before they were hit by the vehicle.

"I was coming down Broadway and I see a motorbike pass me by, but they was going so fast I didn't know it was my son and one of his friends. If I would have knew it was them, I would have turned around and told him, 'You know we don't like you getting on them bikes,'" he said.

He added that the scooter the three boys were on was not his sons.

A neighbor said Jaylen's brother, Aaron, broke down after the accident.

"He was like, 'Come on. Don't do this to me. Wake up!' But Jaylen - his head was open," Jennifer Valdovinos said.

Jaylen's mother was overwhelmed. His aunt said it was a great loss to the family and said they were all in a daze.

Los Angeles police said the other young man went to the hospital for minor injuries, and friends said it was a broken leg.

The driver will likely not face charges, authorities said. They also noticed that motorbikes are not street legal.

Jaylen's father said none of the teens were wearing helmets.