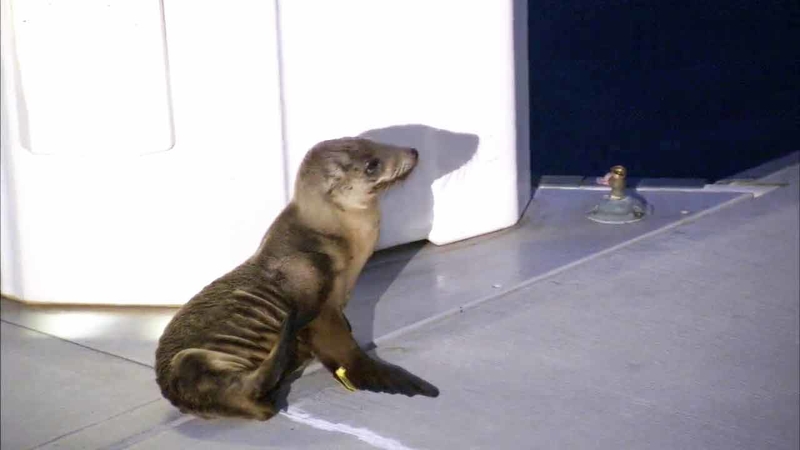 MARINA DEL REY, Calif. (KABC) -- There's a growing concern for sea lions across the Southland. Six more were found dead over the weekend, and the numbers are skyrocketing at alarming rates.

According to animal rescue officials, there have been 210 sea lion deaths in 2015. That number is much higher than average, which ranges from about 50-75.

Monday morning, Peter Wallerstein with Marine Animal Rescue picked up an underweight sea lion pup from a dock in Marina del Rey. He said the 9-month-old pup had already been tagged by federal researchers.

"These animals aren't finding food right now, and there's tons of them coming up on the beach," Wallerstein said.

"I could see his hip bones jutting out through his skin. I could see his entire rib cage when he was on his side, very skinny," described Dana Feldman of Marina del Rey.

On Sunday, six sea lions were found dead on beaches in El Segundo and El Porto, near the northern end of Manhattan Beach.

The big reason for the spike in sea lion deaths is hunger. Marine experts say unusually warm water is forcing nursing mothers to head further out to sea to find food. As a result, sea lion pups are being left behind.

"When they don't come back for the pups, the pups leave and then they're lost. They can't find food, and they're starving and hypothermic," Wallerstein said.

Already this year, more than 900 sick sea lion pups have been cared for along the West Coast. More than 500 of those pups are still in rehabilitation. Those numbers are typically lower as well, according to the National Oceanic and Atmospheric Administration.

Meantime, Sea World in San Diego has actually shut down its sea lion live show for two weeks, so trainers can help rescue the sick and emaciated pups.

As for the rehab process, the pups are given a fluid and antibiotic treatment and are hopefully released after a few months.

It you do see sick sea lions, experts say you should not approach them because they are known to bite.

"Don't pour water on them, don't try to feed them. Just don't do anything. Just wait for rescuers to come," Wallerstein advised.