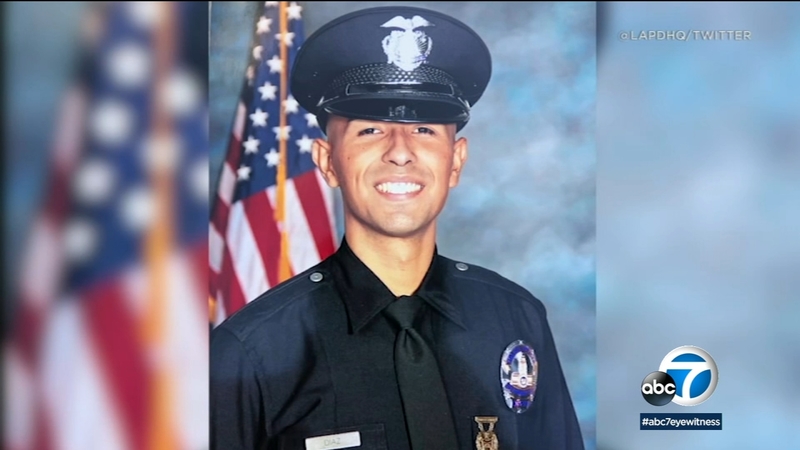 Officer Juan Jose Diaz had been with the department for two years when he was shot early Saturday outside a taco stand in the area of Avenue 26 and Artesian Street and was pronounced dead at the scene, police said. No suspect description has been released.

The 24-year-old officer was last assigned to the Professional Standards Bureau. Becoming a police officer was Diaz's childhood dream, according to people who were close to him.

"He grew up in a bad neighborhood, infested with gangs, yet he led a good life," said Sgt. Manuel Hernandez, who was his Police Academy training officer.

Diaz, his girlfriend and her two brothers were eating at a taco stand when the off-duty officer saw several young men writing graffiti nearby and told them to stop, according to a police source who confirmed to Eyewitness News the details of the incident that were first reported by the Los Angeles Times. One of the taggers then brandished a handgun as they approached Diaz and made threats.

"My understanding was there was some persons or person spray-painting a wall or something, committing an act of vandalism, and the officer -- I don't know what the conversation was -- walked away,'' Craig Lally, president of the Los Angeles Police Protective League, told reporters at the scene. "There was no altercation that I know of, and then later, the officer was walking to his car and this person or persons went up and shot him.''

A person who was wounded in connection with the fatal shooting remained in the hospital and was listed in stable condition Sunday, police said.

More than 100 people gathered for a vigil in Diaz's memory Saturday night in front of LAPD headquarters downtown, where others continue to leave flowers, candles and other remembrances. Among those participating were classmates who attended the Police Academy with Diaz, his two sisters, former teachers and former middle and high school classmates. Several officers at the vigil were in uniform with black mourning bands around their badges.

The vigil was held in front of a photo of a smiling Diaz with a sign that read: Rest easy brother. We'll hold the line from here.''

"I saw him grow up and had no doubt he'd be a great police officer,'' Hernandez said. "He showed up every day with a smile on his face.''

Diaz's sister, Anahi Diaz, told the crowd her brother was living his dream, noting he wanted to be a police officer since pre-school. Their mother and father are broken,'' she said.

"We need to stop this madness,'' she told the crowd.

Meanwhile, Gov. Gavin Newsom joined other officials, including Mayor Eric Garcetti, in extending his condolences to the slain officer's family.

The "tragic killing of off-duty LAPD Officer Juan Diaz is a painful reminder of the gun violence that exists within our country,'' Newsom said.

"Jennifer and I offer our sincere condolences to Officer Diaz's parents and siblings, Chief (Michel) Moore, the entire LAPD force and our extended law enforcement family. As a state, we must do more to stop these senseless acts that continue to take lives. We owe it to 24-year-old Officer Diaz and all Californians.''

On Saturday, a civilian flagged down an LAPD motorcycle officer shortly before 1 a.m. to report a shooting in the area of Avenue 26 and Artesian Street, according to Assistant Police Chief Beatrice Girmala.

The officer called for backup officers, who responded to the scene and located two victims suffering from gunshot wounds, Girmala said. Diaz was pronounced dead at the scene.

Police Chief Michel Moore is out of the country, with Girmala serving as acting chief in his absence. Moore has been in constant contact with the department regarding the shooting, Girmala said, and he shared the department's acknowledgement of Saturday's vigil.

"Tonight, we gathered to honor a man who dedicated himself to our city -- a man whose passion was L.A.,'' the department tweeted. There were hugs & tears -- but we held our heads high as we paid tribute to his dedication to something greater than himself. Tonight, our HQ Facility is proud to have Juan front & center.''