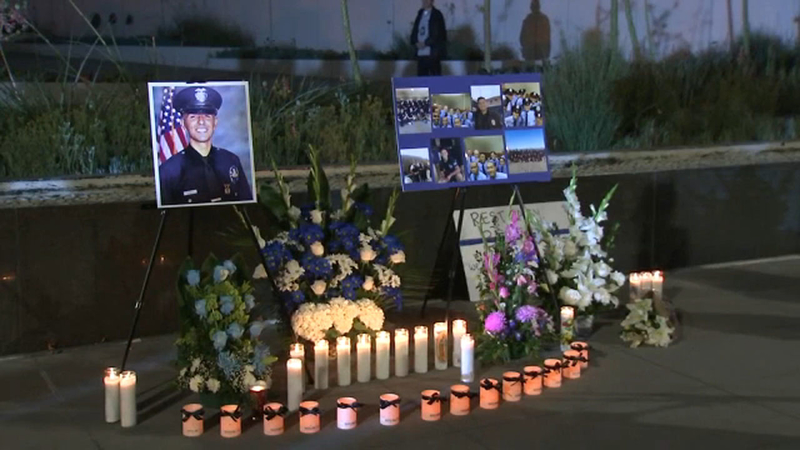 LINCOLN HEIGHTS, LOS ANGELES (KABC) -- Friends, family and co-workers held a vigil for a 24-year-old Los Angeles Police Department officer who was killed while off duty Saturday morning in a Lincoln Heights shooting.

"What we mainly want is for all of you guys to remember Juan for the goofball he was, the personality he was, always made someone smile," said Juan Diaz's sister, Anahi, at the vigil held in front of LAPD's downtown headquarters.

Diaz had been with the department for two years, fulfilling his childhood dream of becoming a police officer, added people close to Diaz.

"He grew up in a bad neighborhood, infested with gangs, yet he led a good life," added Sgt. Manuel Hernandez who was his Police Academy training officer.

A police source confirmed to ABC7 details of the incident that were first reported by the Los Angeles Times.

Diaz, his girlfriend and her two brothers were eating at a taco stand when the off-duty officer saw several young men writing graffiti nearby and told them to stop, according to the source. One of the taggers then brandished a handgun as they approached Diaz and made threats.

An LAPD motorcycle officer was flagged down shortly before 1 a.m. after reports of gunfire in the area of Avenue 26 and Humboldt Street, and discovered that one of the two men suffering from gunshot wounds was a fellow officer, according to officials.

Assistant Police Chief Beatrice Girmala confirmed the death at a 6 a.m. news conference. In a later statement, Mayor Eric Garcetti identified the slain policeman who was assigned to the department's Professional Standards Bureau.

"The senseless murder of Officer Juan Diaz is a shocking reminder of the dangers that LAPD officers face every moment they wear the badge, and the absolute courage and selflessness with which they uphold the oath each day," the mayor said, expressing condolences to Diaz's family and friends.

"My promise is that we will hold them close, stand with them every step of the way - and never tire until we find and prosecute the vicious criminals responsible for this horrific tragedy," the statement said.

The other victim in the shooting was hospitalized and is expected to survive.

"We mourn the tragic loss of a young officer killed in an act of senseless violence and ask for our community's support in finding his killer," LAPD Chief Michel Moore, who was out of the country at the time, said on Twitter.

No suspect was in custody. A description of the gunman was not available.

We mourn the tragic loss of a young officer killed in an act of senseless violence and ask for our community's support in finding his killer.