Search for survivors in human-smuggling boat tragedy to be suspended 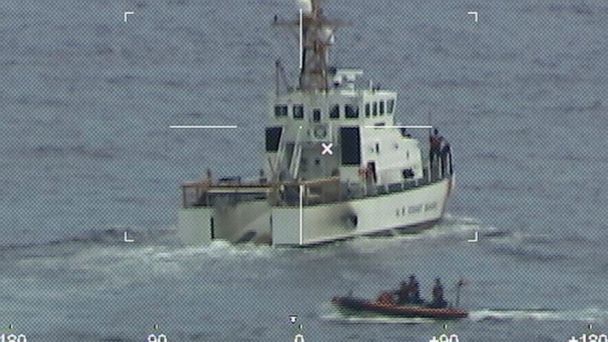 A massive search for 34 people still unaccounted for from a boat that capsized in the Straits of Florida on Saturday will be suspended at sundown on Thursday after a U.S. Coast Guard official announced there are likely no other survivors.

During a news conference Thursday, Capt. Jo-Ann Burdian, commander of the Sector Miami Coast Guard, said four more bodies were found in the last 24 hours, bringing the total to five bodies recovered since the Coast Guard launched a search on Tuesday morning.

Only one of 40 people believed to have been on what investigators suspect was a human-smuggling vessel was found alive, clinging to the hull of the boat, officials said.

Burdian said search-and-rescue crews have scoured the Straits of Florida from the southern tip of the state to Port Canaveral in the north and have yet to find evidence of any survivors. She said crews have saturated an area as large as Massachusetts "over and over and over again."

"It does mean that we don't think it's likely that anyone else survived," Burdian said.

Burdian said the survivor, whose name has not been released, told investigators that no one on the overturned vessel was wearing a life jacket.

The survivor told investigators that a total of 40 people were aboard the boat when it flipped over in rough sea conditions after launching from Bimini Island in the Bahamas on Saturday evening, Burdian said.

Joshua Nelson, operations manager for the tug-in barge that rescued the man, said the survivor told the crew that his sister was on the boat and among those unaccounted for. Nelson, who was not on the barge owned by Signet Maritime Corp. when the rescue was made, told ABC News that his crew reported that the man was dehydrated and "was very malnourished and very distraught."

Tony Salisbury, the special agent in charge of the Homeland Security Investigations in Miami, said the probe into the boat tragedy is ongoing.

Salisbury said investigators have interviewed the survivor of the incident, adding that "we are viewing him as a victim right now."

He declined to comment on the origins or nationalities of the people believed to have been on the vessel.

"The goal of this investigation is to identify, arrest and prosecute any criminal or criminal organization that organized, facilitated or profited from this doomed venture," Salisbury said.

Meanwhile, the Coast Guard announced that a sailboat believed to be part of a human smuggling operation was intercepted at 1 a.m. Tuesday about 40 miles southwest of Great Inagua, Bahamas. Officials said the boat was packed with 191 Haitians and that no one on board had life jackets.

"The Coast Guard maintains a persistent presence patrolling the waters around Haiti, the Dominican Republic, Cuba, Puerto Rico and the Bahamas, to help prevent loss of life on the high seas," said Lt. David Steele, Coast Guard liaison officer to the U.S. Embassy in Haiti. "These grossly overloaded vessels operate without proper safety equipment and are not built for these hazardous voyages."