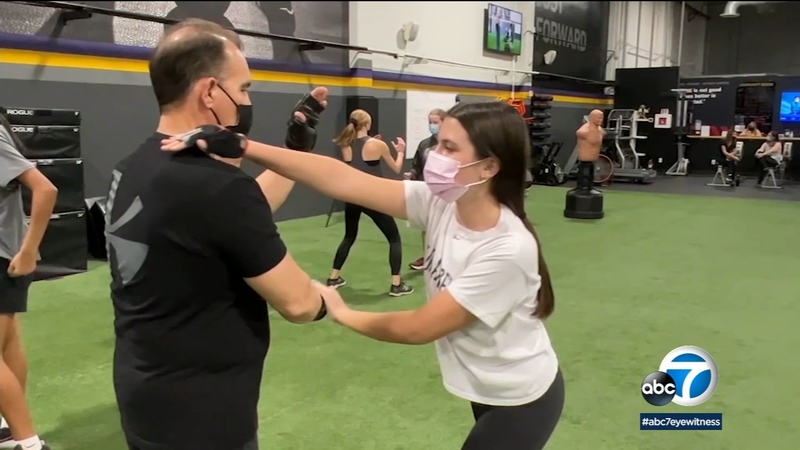 PASADENA, Calif. (KABC) -- What's happening inside Fitsport Kinetics in Pasadena could be life-saving for your kids.

"The techniques they're learning is to inflict a little bit of pain and run," co-owner David Kerr told ABC7.

Kerr said most of his self-defense students are in junior high or high school. The lessons are meant to boost confidence and awareness.

"If you're buried in your cellphone or have earbuds in, you can't hear things," Kerr said.

Hailey Bruna, 14, is among the center's students.

"I think the people are really kind," she said, "and I love getting to learn new things in my everyday life than can also make a girl feel safer."

Los Angeles police announced a juvenile suspect was arrested in connection with the robbery of two teenage sisters as they were walking to school in the Fairfax District.

"What happened out in Fairfax, the girls were walking to school," he said. "A lot of people think danger of violence only happens at nighttime -- it happens all day long. It happens at 7 in the morning or at 2 in the afternoon."

Kayla Kojakafayan, a 13-year-old student, said: "I heard about it on the news, so I came here and they are really teaching me some good stuff."

Kayla said the training is important -- just in case.

"I've seen people getting their purse stolen or their phones or anything, you know," she said. "So I wouldn't want that to happen to me."

Said Kerr: "A lot of the students that I have her going off to college, and so we really prepare them for the dangers that they have on a college campus -- which is even paramount to what they would have sometimes and in their own neighborhood."

Kerr says there's a lot of misconception about the skill level and commitment needed to sign up.