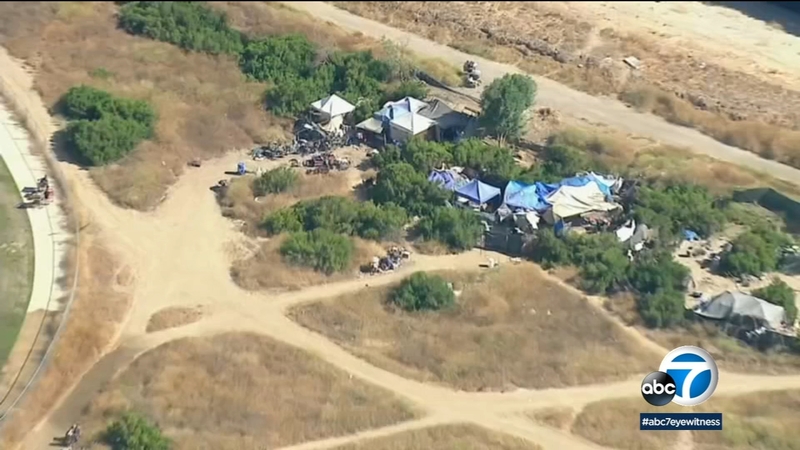 Monday's cleanup, spearheaded by Councilwoman Nury Martinez and several city departments, took place in the Haskell Creek area. Those camping were given a two-weeks notice to vacate the area, and officials made contact with six people still living in the basin Monday morning.

The cleanup - which is phase two of four parts and is expected to last a week - is touted as a public safety effort focused on removing encampments that have the potential of putting people in danger.

"Councilwoman Nury Martinez wants City staff to ensure the park site is safe and accessible to all, without putting anyone in harm's way," said a press release from Martinez's office.

On July 30, a brush fire burned 10 acres and destroyed some homeless encampments in the Sepulveda Basin. About 100 homeless individuals who had been living in the area were displaced.

During the fire, propane gas tanks in the encampments exploded while firefighters were battling the fire.

The blaze came days prior to a scheduled cleanup in the area. During the first cleanup phase on Aug. 5, more than 140 tons of trash was collected and a bomb squad was called in when a grenade was found, according to a press release from Martinez's office.

Under city code, it is illegal to camp overnight in the Sepulveda Basin. The Los Angeles City Council has also passed an ordinance that allows police to order people who are living in wildlife threat areas to leave.

Park rangers want to limit the chances of a fire and guide the homeless to new housing.

"Some of them have left voluntarily, others are starting to gather their stuff. And a lot of times, that comes as a shock to them." Councilwoman Martinez said. "They've been here for so long, I think it's not necessarily resistance but they really don't have anywhere else to go. So in order for them to accept help, it does take a little bit of time."

About a dozen people living in the basin were offered housing and treatment programs, but staying is not an option, Martinez said.