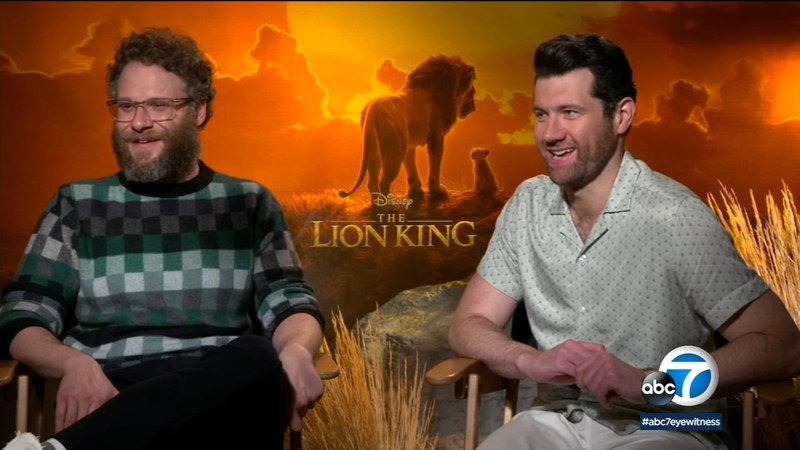 There is plenty of drama in Disney's "The Lion King."

But there are also some laughs - most of them provided by a warthog and a meerkat. Comedians Seth Rogen and Billy Eichner are the voices of the beloved characters Pumbaa and Timon.

The two actors were thrilled director Jon Favreau put them together as a team.

"We got to improvise. We got to riff off each other," said Eichner. "Jon was throwing out ideas. Donald Glover was there. And you can feel that while you're watching the movie. The conversation feels very organic and very natural."

After seeing "The Lion King" at the world premiere in Hollywood earlier this month, the answer to "Can You Feel the Love Tonight" was "yes."

"It's great when audiences like the film," said Rogen. "And it's terrible when they don't!"

"And because we are responsible for the comic relief, you can tell. People either laugh or they don't," added Eichner. "You know when people are faking it and you certainly know when they're not laughing. And people were really laughing. And so I think we were relieved and thrilled by that."

When it came to singing, Rogen felt the pressure of being on a soundtrack with Beyonce, Donald Glover and the others in the cast.

"Everyone's singing intimidated me," admitted Rogen. "But I just had to do my best and hope that it worked out well and it seemed to."

Besides the fun and the music, "The Lion King" has its very dramatic moments; ones that might be intense for the smaller kids in the family. Rogen and Eichner returned to comedy to answer that question.
"I say, "Good!" joked Eichner. "Let them be scared!"

"It's a scary world," added Rogen. "The sooner they learn that, the better they'll be equipped to deal with this horrifying planet."

"I like the idea of parents spending a lot of money to frighten their children," said Eichner.

"Exactly!" agreed Rogen. "And then to have to answer, like, a lot of hard questions about mortality."

"It's the best musical about mortality!" laughed Eichner.