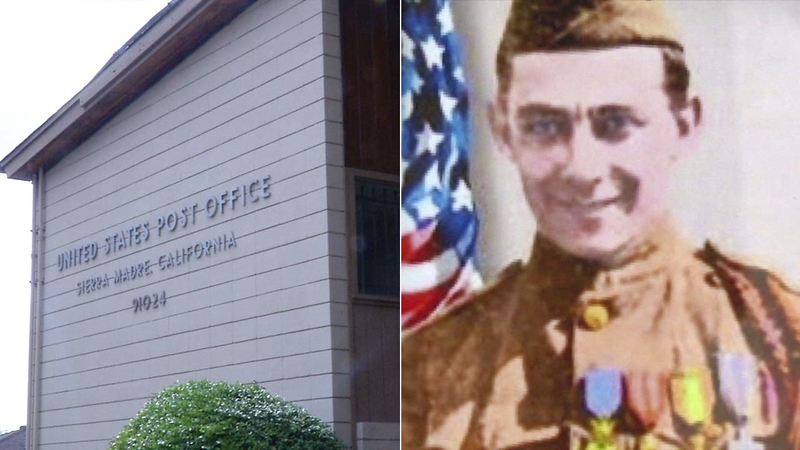 SIERRA MADRE, Calif. (KABC) -- A veteran who fought in WWI and WWII was honored in Sierra Madre, where a U.S. Postal Service office was named after the hero.

Generations of Sgt. Louis Van Iersel's family members were on hand for the Tuesday ceremony, honoring the American hero who left the Netherlands for the U.S. in 1917.

A U.S. Postal Service office in Sierra Madre was named after Sgt. Louis Van Iersel during a ceremony on Tuesday, Nov. 1, 2016.

He demonstrated his courage and heroism even before he touched American soil.

"On the journey, he witnessed a ship being torpedoed by a German vessel," described Rep. Judy Chu, who attended the ceremony.

"Then on the very day he arrived in the U.S., Mr. Van Iersel registered for the draft and enlisted in the Army," Chu said.

He learned English once in the Army. In 1918, he braved enemy fire and gathered information on German troop movements that helped save 1,000 lives, earning him a Congressional Medal of Honor.

Sgt. Louis Van Iersel is seen in an undated photo.

"He was a very quiet man. He felt he had just done his job and didn't deserve the Congressional Medal of Honor," said John Louis Van Iersel, Van Iersel's grandson.

Following WWI, Louis Van Iersel moved to Sierra Madre, where he raised a family. But he continued fighting for freedom. During WWII, the Army turned him away due to his age - so he enlisted in the Marine Corps.

"And had he been able to get away with it, he would have enlisted in the Korean War, but he did get a little old," John Louis Van Iersel said. "I got to wear his jacket one time with all the medals on it, and boy it was heavy."

At the ceremony, John Louis Van Iersel thanked officials and the Veterans of Foreign Wars Post 3208 for helping keep his grandfather's legacy alive.

"I'd also like to thank my family for being here, and I'd like to thank the community for supporting us and my grandfather. Thank you," he said.

According to the city of Sierra Madre's Facebook page, Louis Van Iersel died at the age of 93 in Sierra Madre and is buried in Arlington Cemetery.