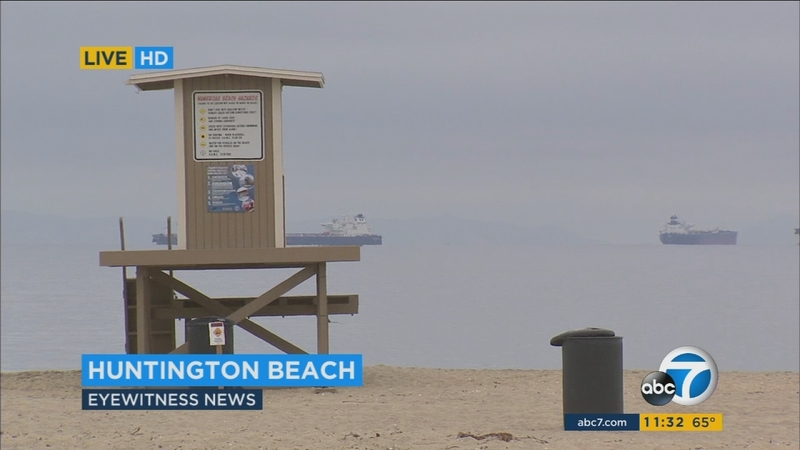 HUNTINGTON BEACH, Calif. (KABC) -- A stretch of Sunset Beach in Huntington Beach was reopened on Monday after officials closed the area over the weekend due to shark sightings near the coast.

Two or three sharks longer than eight feet were spotted by an Orange County Sheriff's Department helicopter around 2 p.m., officials said. They were seen about 150 yards offshore from Anderson Street.

Signs warning people to stay out of the water at Sunset Beach appeared to be missing from their posts early Monday morning.

"There's usually a sign out there, but somebody takes them as souvenirs so the signs are gone but the little post is still out there," said Michael Delamater, a Huntington Beach resident.

Delamater said without the warning signs, some people just don't know it's too dangerous to go into the water.

Area resident Lacora and several other surfers hit the water near Sunset Beach Monday, mindful of the shark sightings but not deterred enough to stay out.

"There's sharks in the water every day. It's a matter of whether you let that bother you or not," Lacora said.

Juliana Skjonsby says she knows to scramble out of the water the second a shark is spotted.

"It's kind of just apart of surfing," she said. "We've already seen one before and just got out. It was like a couple of weeks ago."

There have been multiple shark sighting in the last few weeks. A woman is recovering after being bitten by a shark off Corona del Mar State Beach last week.

In April a surfer captured cellphone video of a great white shark jumping out of the water off Sunset Beach.

Area resident Ray's son was out surfing near Sunset Beach Monday with several classmates who are part of a surf team.