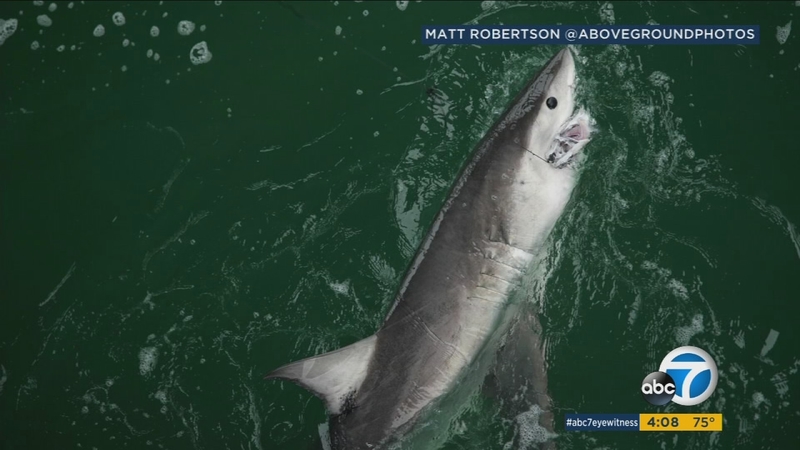 SAN CLEMENTE, Calif. (KABC) -- All beaches remained closed in San Clemente Monday after more than two dozen sharks were spotted off the coast.

Up to 25 sharks were seen in the waters on Sunday within 25 yards of the beach between Cotton's Point and Capistrano Beach, some up to 10 feet long.

Monday morning, two great white sharks were seen off the coast. Fisherman Spencer Wonder even hooked and released one of them while he was fishing off San Clemente Pier.

Wonder said he saw the first shark, which he estimated was about 16 to 20 feet long, when the sun first came up.

"About 20 minutes later, we were hooked up, a slightly smaller fish, probably in the 12-foot range," said Spencer, who said after identifying the type of shark and taking some photos, he cut the shark free.

Lifeguards said the closure was set to last at least through the end of Monday.

This is the latest of several shark sightings in Orange County in recent weeks.

In April, San Onofre State Beach was closed when a woman was bitten by a shark.

Sunday's sightings were the most sharks spotted in the area so far.

Scientists believe there are a number of reasons behind the increase in shark sightings off our coast. These reasons may include a change in weather patterns that impact migration. Officials also want to remind beachgoers that the ocean is the sharks' home, so people should stay away when there are sightings.

"A healthy shark population is indicative of a healthy marine ecosystem altogether. They're the predator, they're the apex predator, top of the line. So if they're able to survive and sustain and grow at the rate we're witnessing, that means it's a very healthy bottom trophic level environment," Wonder said.

Signs were posted along San Clemente beaches warning people to stay out of the water for now.

Officials are also reminding people chumming for sharks or trying to intentionally hook a shark is illegal since sharks are a protected species.