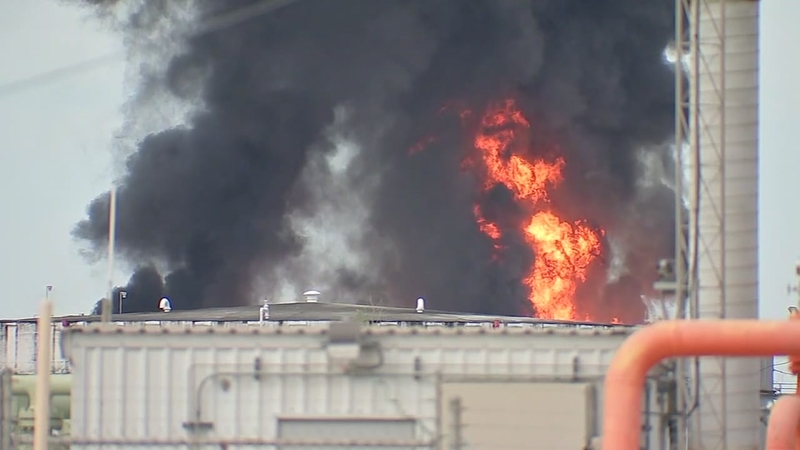 Investigation continues to find the cause behind ITC fire

As of 3 a.m. Thursday, 2.2 million gallons of chemical remained. Despite multiple requests to ITC for updated numbers, they were never provided. A spokesperson would only say the tank, 80-7, at the 15-tank tank farm, is "not yet completely emptied."

The danger of another leak exists until all the chemical inside is gone.

"I can't tell you an exact time frame on that," said ITC Spokeswoman Alice Richardson at a news conference.

Thursday also saw the arrival of another federal investigator in Deer Park. The Chemical Safety Board (CSB), an independent, nonpartisan agency, sent an investigator to look into the cause of the fire and whether anything happened internally that led to the catastrophe.

"I think it's important that agencies at the state and federal level are paying attention," said Houston Congresswoman Lizzie Fletcher, who has been watching the developments.

The CSB has no enforcement power. The agency investigates and can only offer recommendations. Real change, if needed, comes through prosecution or civil lawsuits, said lawyer Sean Tracey. He has represented about 100 clients in chemical exposure, explosion and release cases.

"None of this ever happens out of the blue. This could have been seen coming a mile away and I guarantee you somebody inside the company knew or should have known this was going to happen," said Tracey. "I have never seen a chemical explosion case, a chemical release case that when you really start digging didn't have a multitude of warning signs coming that were ignored."

The ITC tank fire burned as many as eight tanks from Sunday to Wednesday. It briefly re-ignited later Wednesday but was contained within about 30 seconds, the city's government Twitter account said.


The fire has created concern about the air quality from residents in the area due to the thick, black smoke from the fire.

Environmental groups said residents who live near the facility have experienced various symptoms, including headaches, nausea and nose bleeds. According to the Centers for Disease Control, long-term exposure to the highly flammable chemical causes harmful effects on the blood, including bone marrow.

You can go to readyharris.org to see the air quality reading map.

ITC told ABC13 an employee monitoring the area around the tank fire detected the elevated levels of benzene using a handheld device.

The Associated Press contributed to the report.

5 worst fires in Houston history since 1947