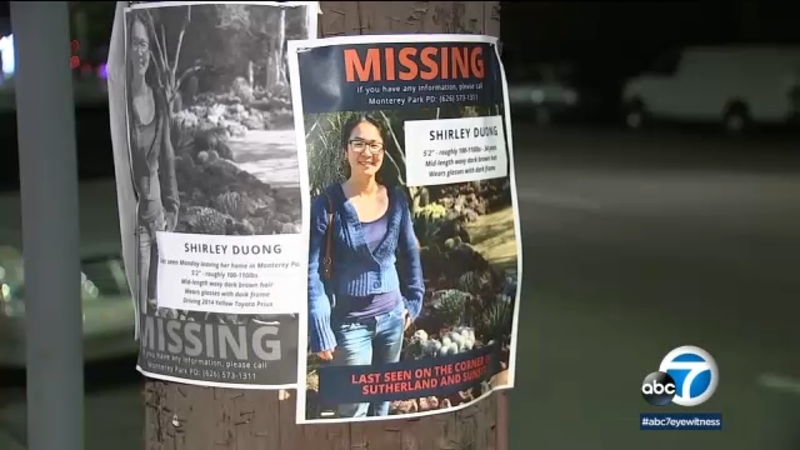 MONTERERY PARK, Calif. (KABC) -- A missing woman's friends on Friday posted hundreds of flyers in the Echo Park area, hoping to enlist the public's help in finding her.

Shirley Duong, a 34-year-old resident of Monterey Park, has not been seen since Monday. Her car was found abandoned Wednesday near the intersection of Sunset Boulevard and Sutherland Street in Echo Park.

"We've seen some footage of her walking up and down this street, so we're led to believe that she's in this area," Duong's friend Jake Bachman told ABC7. "She is not mentally in a great state of mind."

Friends say Duong suffers from depression. They have been canvassing the area north of downtown Los Angeles, posting flyers and searching for her.

Duong left home without a cellphone or her wallet. She was last wearing a bright blue hoodie and jeans.

"Being a young woman out in the streets -- especially at night -- she's very at-risk," Bachman said. "She could potentially run into some trouble, so we just want to make sure we get her home quickly as possible."

Anyone with information about her whereabouts is asked to call the Monterey Park Police Department at (626) 573-1311.