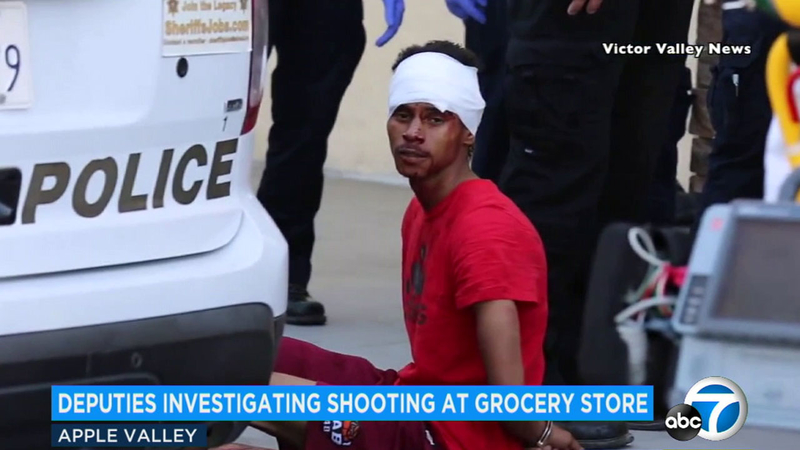 APPLE VALLEY, Calif. (KABC) -- Gunfire erupted at an Apple Valley grocery store as a shoplifting suspect tried to leave without paying for merchandise stuffed inside a baby carrier, police said.

The suspect fired multiple shots as store security tried to stop him from leaving with the unpaid items, according to the San Bernardino County Sheriff's Department.

No one was struck by bullets.

The suspect was injured as he fought with the store employees who detained and held him until deputies arrived.

He was seen sitting on a curb with a large bandage wrapped around his head and his hands cuffed behind him as detectives investigated the scene.

One store employee had minor scratches, but it wasn't immediately clear if that was from being grazed by a bullet or during the scuffle with the suspect.

Police say the incident began when the suspect, identified as Charles Scott, 24, of Hesperia, entered the WinCo store at Jess Ranch Marketplace shortly before noon Thursday.

He was with a woman, identified as Latoya Moore, 21, of Hesperia and the two of them entered the store with a 6-month old baby girl in a carrier.

They put store merchandise into the baby carrier and tried to leave the store without paying, employees told police. Loss-prevention officers stopped them and say Scott pulled out a handgun and fired several shots.

The officers fought with him and were able to disarm and detain him.

Moore tried to run out into the parking lot with the baby, but she was also detained.

Scott was arrested for attempted murder, robbery and child endangerment.

Moore was arrested for robbery and child endangerment.