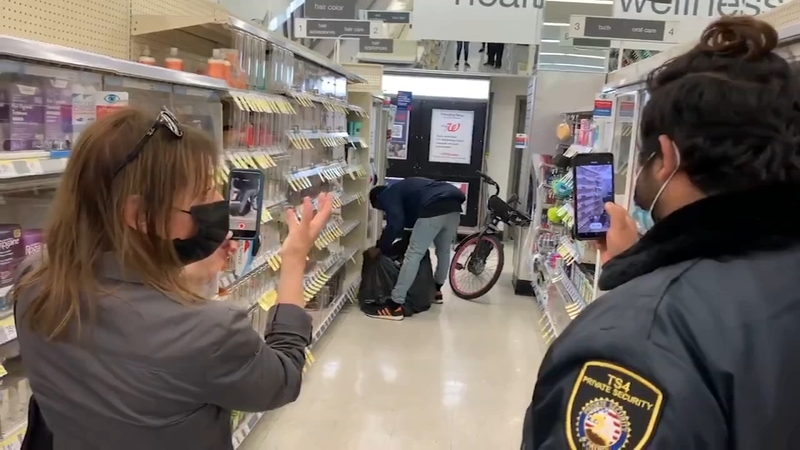 SAN FRANCISCO -- Cell phone video taken Monday shows some of the brazen crime that has been driving retailers out of San Francisco.

The video shows that three people used their cellphones to record a man filling a garbage bag with items in a San Francisco Walgreens. But the recordings didn't discourage the theft, nor did the security guard's attempt at grabbing the bag.

The man got away with everything on a Lyft bike that he rode down the aisle and out the front door.

"That's when he sort of ran into me with his bicycle," said Lyanne Melendez, a reporter with ABC7's sister station KGO-TV. She took the cellphone video while she was shopping at the Hayes Valley Walgreens on Fell and Gough streets on her day off work. She was not injured.

"It's hard for me as a journalist to say 'I won't be involved, I can't get involved,' I have to be sort of neutral, but this is also my city. I live in this city and I see this constantly. Not only Walgreens, but cars, and my garage door has been broken into twice."

In the past year and a half, Melendez says she has witnessed three of these out-in-the-open shoplifting sprees at different Walgreens throughout San Francisco.

"At what point do we say enough is enough, we want our city back," she asked.

Last month, Safai held a hearing on organized retail theft and says the DA and police department need a much more coordinated response.

"It might even involve a more aggressive effort when it comes to surveillance cameras, because you see the same individual hitting multiple locations, then you can begin to have deeper conversation about bringing multiple charges, or aggregate charges against that individual and really start to break this up."

Safai says he's seen some success in his district at a Walgreens in the Excelsior, with uniformed off-duty police officers guarding the store.

Safai says San Francisco District Attorney Chesa Boudin and SFPD have until mid-July to respond to his letter of inquiry on organized retail theft.