How an urban shrimp farm in Downey is offering an innovative, sustainable alternative to overfishing 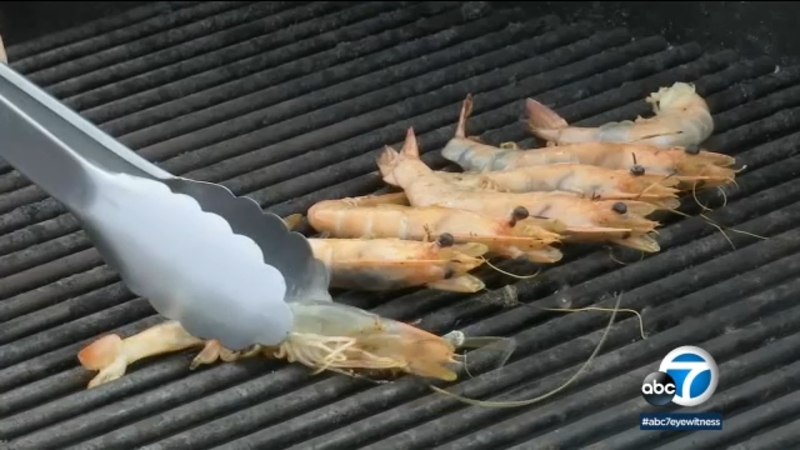 DOWNEY, Calif. (KABC) -- The United States is the largest importer of shrimp in the world: 2.2 billion pounds every year. What you might not know is that the average shrimp is frozen for three to six months after being caught.

And pollution like microplastics and metal often creeps into the world's shrimp population which, like all wild seafood, is being overfished.

"In order to catch shrimp, you need a net," said Stephen Sutton, the founder of TransparentSea. "The net has to have small holes to catch a small animal. Anything bigger than the hole in the net is going to be caught -- and in almost every case killed -- so shrimp fishing on average globally kills 5.7 pounds of other sea life to catch one pound of shrimp that we eat."

So if your shrimp doesn't taste quite right, you know why. Enter a mysterious warehouse in Downey, full of 300,000 gallons of water: TransparentSea is one of the country's first urban shrimp farms.

"We want to relieve pressure off wild stocks by being more efficient with our marine resources and growing them in a farm," said Sutton. "And second we want to produce for our consumers a clean product that they can know, without a doubt, there's no question this does not have any chemicals added to it.

"People want to know where their food comes from and they're willing to pay to make sure it's what they want. That's primarily why I moved to L.A. -- from a business standpoint, I think there's also a lot of cultures here who value shrimp."

The ruptured offshore pipeline that spilled tens of thousands of gallons of crude oil off the Orange County coast this fall did not have a fully functioning leak detection system at the time.

Pacific white leg prawns come from a hatchery in Florida. Seventeen days into their lives, they're shipped via Fedex to TransparentSea's warehouse in Downey, where they're farmed for three months before being ready to eat.

When the shrimp arrive, they spend one month in the nursery before moving to one of eight production tanks that replicate the ocean environment with a water temperature of 86 degrees Fahrenheit.

The farm recycles 99% of its water, uses less energy than most fisheries and controls everything the shrimp eat to limit waste for resource efficiency. The shrimp are never frozen, and after three months they're delivered to one of the 40 local restaurants that TransparentSea sells to. These include some of the top kitchens in Los Angeles, like Gjelina in Venice and the Rustic Canyon Group. Farmers markets are next.

The company says their goal is to provide a transparent line of communication into seafood and create a movement that transforms the industry.