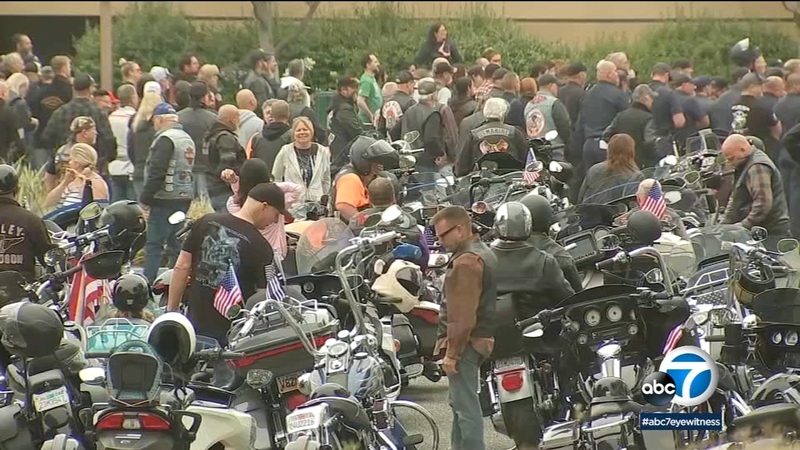 Hundreds of motorcycle riders gathered at Simi Valley City Hall for the annual "Ride for the Blue" event.

The event honors the late Ventura County Sheriff's Department sergeant. This year, organizers included other first responders in the wake of the pandemic.

"So, now we are going to honor firefighters, police officers, doctors, nurses, EMS, everybody that serves and protects us in Ventura County," said John Short, founder of the Sgt. Ron Helus Ride for the Blue event.

Helus was killed following a gun battle at the Borderline Bar and Grill restaurant in 2018, which took the lives of 11 others. His widow thanked those in attendance for coming.

"He would have been humbled to have such a wonderful event named in his honor," said Sgt. Helus' widow, Karen Helus. "On behalf of Ron and myself, thank you for being here today."

Motorcyclists will make stops at nine different police stations throughout Ventura County including the sheriff's department in a show of appreciation.

A new report on the deadly mass shooting at the Borderline Bar and Grill in Thousand concludes that "we will likely never know the true motivation behind the attack."

"The impact that he made in saving lives at Borderline, just, it's absolutely perfect that it's named after him," said Ventura County Sheriff Bill Ayub. "We really are thankful that recognition is given to him and his family."

All proceeds from the ride will go to 911 At Ease International, a non-profit organization helping first responders and their family with confidential therapy for free.

"Anytime we can come out and support our local firefighters, and sheriffs, and all those who serve first responders, that's why we want to be out here," said Keni Dawkins, one of Saturday's riders.

"This is a great cause, and the turnout is amazing. We need more respect for the police department. More respect for the first responders," said Tom McCarthy, another rider that participated in Saturday's event. "They are putting their lives at risk for us."

Riders are going the extra mile to keep Sgt. Ron Helus' spirit of sacrifice to help others in need, going.