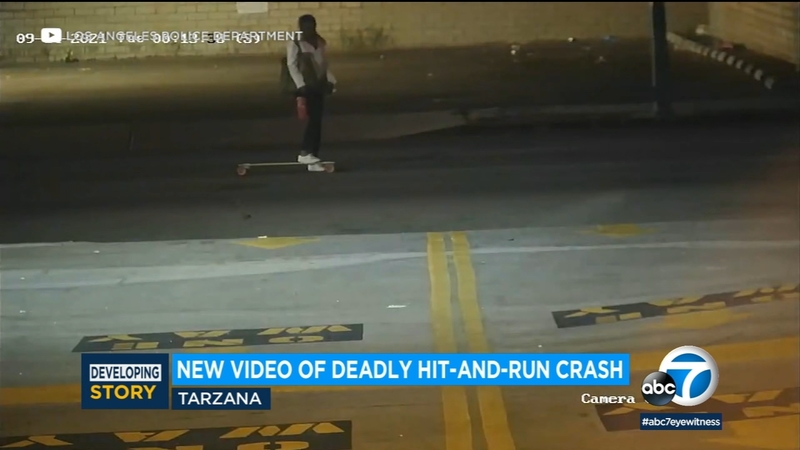 TARZANA, LOS ANGELES (KABC) -- Authorities have released surveillance video in hopes of identifying and finding the driver involved in a Tarzana hit-and-run crash that killed a woman who was riding a skateboard.

The collision occurred at about 12:30 a.m. Tuesday on Tampa Avenue, just south of Oxnard Street, where the victim was hit by a silver four-door sedan, according to the Los Angeles Police Department. The skateboarder was not in a marked crosswalk at the time, investigators said.

The driver of the Toyota Avalon, who did not stop to help the woman, fled the scene by driving southbound on Tampa Avenue, the LAPD said.

The woman was pronounced dead at the crash site. She was later identified as 32-year-old Paris Camille Banks.

The vehicle being sought is the 2013-2018 model with damage to the front end of the vehicle, according to authorities. It is seen moving through an intersection in the footage that was released by police.

Video from a separate angle shows Banks on the skateboard just before she was struck.

A man was arrested in connection with a hit-and-run that killed a mother and injured her 3-year-old son near Dockweiler State Beach last weekend, police said.

"Drivers are reminded that if they become involved in a collision, they should pull over and stop as soon as it is safe to do so, notify emergency services, and remain at the scene to identify themselves," the LAPD said in a statement. "The public is also reminded that, as pedestrians, they should exercise caution when crossing streets by doing so in a safe manner, obeying traffic lights, crossing within marked crosswalks, and obeying the rules of the road."

A standing reward of up to $50,000 has been offered by the city of Los Angeles for information that helps police solve a fatal hit and run.