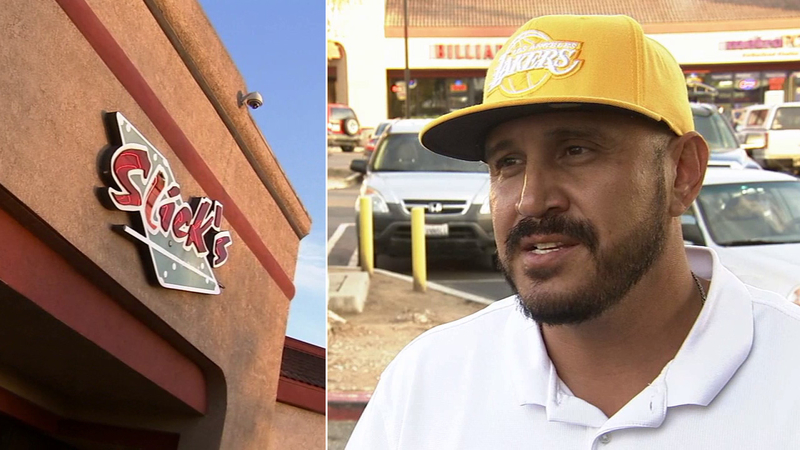 NORCO, Calif. (KABC) -- Joe Navarrete returned Wednesday night to his former place of work -- Slick's in Norco, where he worked as a bouncer at the bar every other weekend.

While working at Slick's in the 1800 block of Hammer Avenue on May 9, Navarrete says, a woman approached him. She was bleeding and was barely able to talk.

"She was trying to but she was just so hysterical... All I understood was that she fought off a rape, and right away, my first instinct was to call 911 for her," Navarrete said.

James Allen Schneider, 21, of Norco was charged with attempted rape, assault with a deadly weapon and robbery.

James Allen Schneider, 21, of Norco was arrested on attempted rape, robbery and assault with a deadly weapon charges in connection to the incident, according to the Norco Sheriff's Department.

Schneider had followed the victim to the 1500 block of 2nd Street. He physically assaulted her and then threatened to sexually assault her. During the assault, Schneider took her purse and cellphone. The victim fought back and ran about a half-mile to Slick's.

Navarrete called police and the victim was transported by ambulance to a local hospital with non-life-threatening injuries.

Back at the bar, however, Navarrete says the owner was upset he had called 911 and told him that the woman's problems were not the bar's responsibility.

"I was shocked. I couldn't believe that he was stating that to me," Navarrete said.

Eight days later, he says he received a call from the owner telling him he was fired.

"Right away, I asked him why, because I called 911? And then he started stating about it's not our responsibilities to be calling 911. We have no responsibilities outside the door. That she should've called it herself," Navarrete said.

He released the following statement: "Joe was not fired for calling 911 as he claims since he was instructed to do so by the head bouncer... Over the last 20 years numerous employees called 911 from Slick's and no one was ever fired."

Navarrete is far from convinced.

Whatever the official reason, customers have already taken to social media, posting comments on Slick's Facebook and Yelp pages.

"DON'T SUPPORT THIS PLACE!!!!!! the owner would not allow his bouncer to help a raped and beaten woman. Disgusting. You should be ashamed of yourself," Monika W. of Riverside posted on the bar's Yelp page.

Despite her dad losing his job, Navarrete's daughter, Chelsea, says she is happy he did what he did.

"I have a little sister. I don't want that to happen to any girl. That's just a bad situation, but he did the right thing by helping her," she said.

If the same situation arose again, Navarrete says he'd handle it the same way. He says that at this point even if he were to be offered his job back at Slick's, he wouldn't accept the offer.