Corona commute is still a crawl for drivers 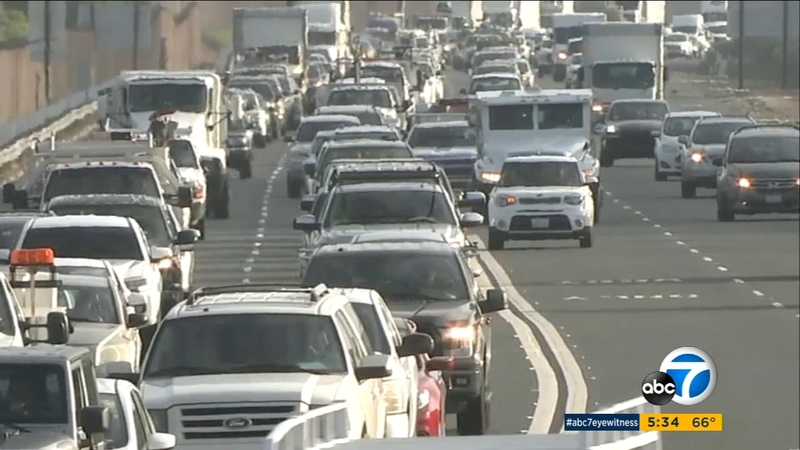 Corona commute is still a crawl for drivers

Last month, she started a job as an assistant to a Farmers Insurance agent in the city of Orange.

She now joins the estimated 280,000 daily commuters on the 91 Freeway, which is ranked one of the worst commutes in the nation.

"First thing when I wake up, check the traffic, check my Google Maps. See if I need to rush through getting ready, if I have time to get coffee and what podcasts I am going to listen to on my drive," Mafnas said.

Eyewitness News went along for her normally 45 minute to an hour drive, but on this particular day there was rain and an accident making it more of a challenge.

"Just getting out of Corona is the worst part," she said.

Her biggest complaint: the bumper-to-bumper traffic.

But there is no way around it. A portion of the 91 Freeway is referred to as the "Corona Crawl" by locals who travel it daily. It lives up to the name.

"Rougher than usual because of the lane closure, apparently there was a truck on fire," Mafnas said about the day's commute.

But even on a good day, traffic is still backed up at Main Street where Mafnas gets on the freeway.

"There is no entrance to the fast track were I am at, and that's where I need it, and by the time I get to the next entrance at the county line, there is no traffic," she said.

"The improvements in many ways have improved the overall flow of the freeway," said John Stanford, Deputy Executive Director with the Riverside County Transportation Commission.

He added that, "Eastbound there has been significant improvement, westbound the backup is not as bad, but we do have a serious issue on the western edge of the 91 in Riverside County at Green River, and that does spill over to the surfaces streets in the city of Corona."

RCTC is seeking $75 million in federal funding to build three new projects, which would include a new auxiliary lane between Green River and the 241 toll road.

"That is an area where a lot of cars are getting on, if we could build some more capacity there it should ease that congestion through there, help safety and congestion at the same time," Stanford said.

For now, Mafnas will have to put up with her new routine and commute. On this day her commute took an hour and a half.

"It is just all preparation. Even the night before I prepare," she said. "You know I get my lunch ready, bag at the door, my keys at the door, my shoes at the door. I know the outfit I am going to wear that's all for this commute."

But she adds with a laugh, "It is the honeymoon phase for me because I just started this job. So, I am excited to go to work... Ask me this in five years, you'll hear a different side of me."
Report a correction or typo
Related topics:
societycoronariverside countytransportationtrafficdriving
Copyright © 2021 KABC-TV. All Rights Reserved.
TOP STORIES
TX mother, boyfriend arrested in case of 8-year-old's decomposing body
LA creates basic-income program to help 3,000 families
Family of man killed by Tustin police wants officer behind bars
Kobe crash photo lawsuit: Sheriff, fire chief ordered to testify
LA, Long Beach ports to fine companies for lingering containers
Violent brawl breaks out at Miami dog show
All migrant children at Pomona shelter reunited with family, sponsors
Show More
Pandemic drinking leads to spike in liver transplants
Political comedian Mort Sahl dies at 94
Los Angeles city employees have until Dec. 18 to get vaccinated
Investigators identify people found dead inside home on Balboa Island
LAPD investigating alleged sexual assault of student at Hamilton High
More TOP STORIES News