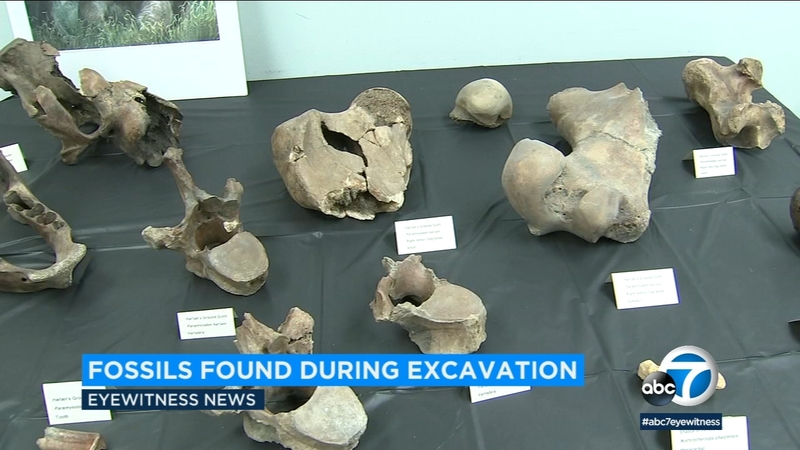 LOS ANGELES (KABC) -- What comes to mind when you think of Los Angeles? Hollywood, celebrities, the Oscars -- a Columbian mammoth? More than 500 Ice Age fossils have been found during Metro's Purple Line expansion.

"We are the paleontological team that's there all day every day looking for fossils while the dirt is being moved. And this is just an example of some of the fossils that are coming out of the three stations," said Ashley Leger, a paleontologist.

What exactly did they find?

"Everything from gophers to mammoths in size. We've got camels and bison, horses and giant ground sloths. Mammoths, mastodons and even sabertooth cats and dire wolves. We're getting a beautiful picture of the Ice Age here in Southern California," Leger said.

One of the great finds: Hayden, a carefully preserved, nearly complete and pristine white skull of a juvenile Columbian mammoth.

So the next time you're driving along Wilshire Boulevard, just imagine what else may be discovered during this expansion project.

"If the paleontologist see anything that they think might be a fossil, we can temporarily divert the construction work to another part of the excavation to allow them to investigate whether that is a fossil or not," Sotero said.

Once the project is complete in about five years, you just might be able to see some of these fossils at the Natural History Museum or the La Brea Tar Pits.

"We anticipate finding additional fossils as we move forward with the second and third phase of the Purple Line construction project," Sotero said.