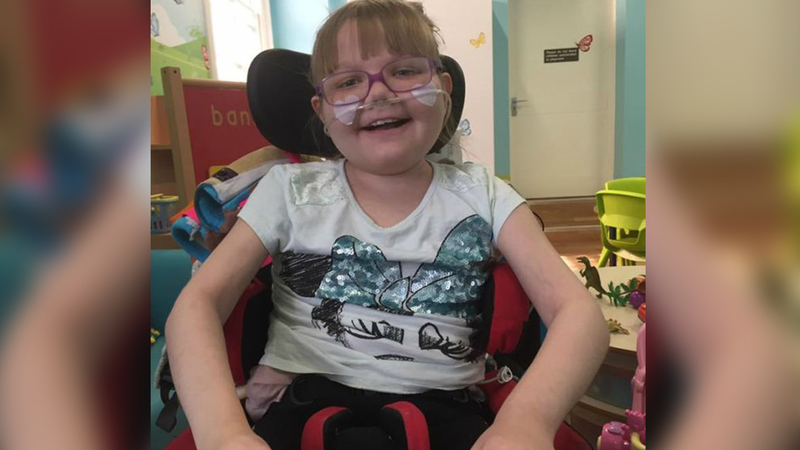 Ed Sheeran is used to making ladies swoon around the world, but to one little girl from New Addington, England, he really is her very own Prince Charming.

Melody is 9 years old. She cannot walk or talk, and has spent nearly 80 percent of her life hospitalized. That's because she suffers from Rett syndrome, a condition that "causes problems in brain function that are responsible for cognitive, sensory, emotional, motor, and autonomic function."

Melody's childhood has been marred by wide-ranging, debilitating symptoms and complications of her illness. According to her mother, Karina Driscoll, Melody has severe chronic pain, scoliosis, internal bleeding, epilepsy, osteoporosis -- and so much more. She has to be fed through a feeding tube and is on a constant stream of morphine to manage her pain.

When she has particularly bad flare-ups, her "whole body becomes swollen internally and externally; she gets black fingernails and toenails; her lips become covered in cold sores; her pain gets worse; she gets pancreatitis, her eyes swell up and the blood vessels in them burst and her internal bleeding gets worse, requiring lots of blood transfusions."

Perhaps the most devastating part of her story is that no one knows why this happens to her -- all they can do is manage her pain and hope to make her as happy as possible.

"The very first time she heard it, she couldn't stop smiling at Ed on the TV," Karina explains. "Then every single time Ed came on TV from then on, Melody had the same reaction. One of those times Melody was in severe pain and Ed managed to pull her out of that pain episode. So now every time she's in pain we have to put Ed's videos on our phones, even the nurses."

Given the huge impact Ed has had on Melody's short life, Karina knew she wanted to do everything in her power to bring them together. So last year, she put together a video that she was actually able to get Ed's manager, Stuart Camp, to see. Unfortunately, the best he was able to offer at the time was for Melody to attend one of Ed's concerts. Katrina was forced to pass on the offer due to Melody's poor health.

It seemed all hope was lost on the two ever meeting, as Karina was told he would not be able to make a visit to the hospital and in December 2015, he announced he was taking a break from public life. But finally, about three weeks ago, Driscoll received a knock on her door. Standing there was a police officer who told her that Melody's name had been given to his department for her to receive a present.

"I told the police officer that I wanted to show him the video of Melody so he could see exactly what Melody had been through. He started crying and vowed he would get involved with our campaign to make her dream come true," says Karina.

Once his police department started tweeting the video, it quickly went viral and again reached Ed's manager, who then contacted Karina. He said he would make Melody's wish come true and a week later, it did.

On the morning of Wednesday, November 9, Ed Sheeran walked into Epsom Hospital in Surrey -- no bodyguards, no assistants, no cameras. For the next hour and a half, Ed sat with Melody.

"A lot of people think that Melody [doesn't] understand anything because she can't speak, so they treat her like a baby. But not Ed. He spoke to her normally, he got that she understands everything. He was so gentle with her and she was so gentle with him. Normally she can lash out in frustration but not once did she [do that] to Ed. She kept blowing him kisses so he gave her real kisses, she kept opening her arms to him so he kept giving her cuddles."

He even serenaded her with both of her favorite songs -- "Thinking Out Loud" and "Photograph" -- playing both on Melody's pink toy guitar.

"[Melody] kept stroking his arm and leg and his tattoos. She kept smiling and giggling at him. You could see in her eyes how much she loves him but you could also see in his eyes by the way he looked at her that that feeling was mutual."

Just 10 minutes after Ed left, Karina received a call from Ed's manager. Ed had called him right away and told him how "touched" he was by Melody, and how he'd like to keep in contact. He even offered to bring Melody to his sound checks as a way for her to experience his performances in a safe environment that wouldn't jeopardize her health.

Now that the experience she worked so hard to make happen has come and gone, Karina says she feels "overwhelmed."

"We've been able to give Melody the best gift in the world. She got her Prince Charming. It made all the fighting I've ever done for Melody worth every second just to see the love in both their faces which they have for each other. I tried so hard to hold back the tears as it wasn't about me."

Karina says she is incredibly thankful to all the people who shared Melody's story on Twitter and Facebook ("I owe them everything"). But most of all, she is thankful to the one man who has managed to inspire her little girl to keep fighting for her life.

"I owe Ed Melody's life. He is the very person who keeps her alive, she only fights because of him. She's almost given up so many times but we put Ed's [music] on and she starts fighting again. I was told she wouldn't live past the age of 4 but she [will be] 10 in December. Ed Sheeran doesn't realise the true impact he's had on Melody and all her team who love Melody ... I hope he never ever forgets her because we will never ever forget him or this moment."

And while many will read this story and focus on Ed's beautiful act of kindness -- and it most certainly was incredible -- the real hero of this story is Melody. No matter what life throws at her, she never gives up. Even on her darkest days, she keeps smiling.

"She has undergone more than 40 operations but still manages to smile every single day," says her proud mom. "She has taught me to never give up and to always fight for what you believe in. She is a living miracle."

Now if that doesn't inspire you, we don't know what will.