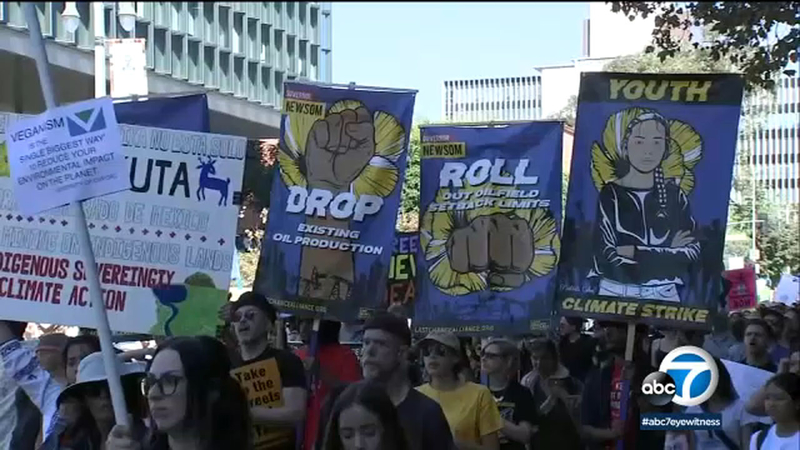 Climate activists showed up in strength in downtown Los Angeles Friday to demand that Gov. Gavin Newsom phase out fossil fuel production in California. Among the group of about 1,000 protesters was the face of the movement, Swedish 16-year-old Greta Thunberg, as well as singer Billie Eilish.

Despite the fact that California has lead the way on many climate change policies, it remains one of the larges oil-producing states in the country.

After marching form L.A. City Hall to Newsom's downtown office for the "Youth Climate Strike," the young protesters shared stories about living in Los Angeles neighborhoods where fossil fuel industries operate. Many in attendance were LAUSD students who were allowed to miss class with permission from their parents.

"People are already suffering and dying from the climate and ecological emergency and it will continue to get worse. Doesn't this mean anything to the decision makers? I will never understand how they can put short-term interests above human lives," Thunberg said as she addressed the crowd.

Recent wildfires that have broken out across the region were also highlighted as Thunberg spoke about a trip the Northern California community in Paradise which was leveled by the deadly Camp Fire last year.

"Today in California, we can see the wildfires happening just around the corner that are being intensified by the climate crisis," she added.

Thunberg gained notoriety by sailing to the U.S. in a zero emissions sailboat for the United Nations General Assembly. At the UN, Thunberg called out world leaders including President Trump for inaction on climate change.

"It's my future and it's something I really care about and if I'm not here to see it, then why am I even existing on this planet if it's not going to exist anymore when I'm an adult," said Andrea.
Report a correction or typo
Related topics:
societylos angeleslos angeles countygavin newsombrush firestrikeclimate change
Copyright © 2021 KABC-TV. All Rights Reserved.
TOP STORIES
Kern County deputy killed, another wounded in shootout
Coast Guard searching for missing swimmer in Santa Monica
Man arrested for slashing people at Whittier quinceañera
SoCal seeing heavy rain, thunderstorms Monday
Man shot in leg after collision on 60 Freeway in Pomona
Newsom to speak on efforts to increase vaccinations
LA averaging more than 2,300 cases of COVID-19 per day
Show More
All eyes on Stafford as Rams open OC training camp
Passport backlog: Hundreds line up early for Van Nuys event
2 killed in wrong-way crash on 91 Freeway in Long Beach
Skeletal remains found in Ballona Wetlands are ID'd as missing woman
Fauci: CDC may back wearing face masks more
More TOP STORIES News