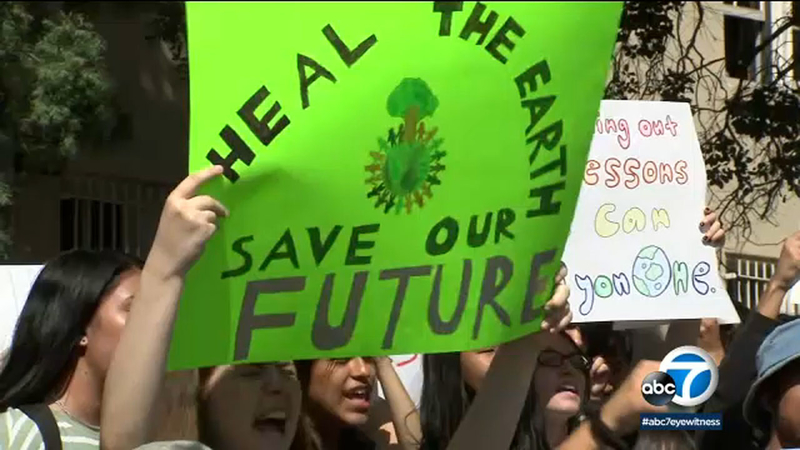 LOS ANGELES (KABC) -- A wave of climate change protests swept across Southern California and the globe Friday, with hundreds of thousands of young people sending a message to leaders headed for a U.N. summit: The warming world can't wait for action.

Hundreds of people around the Southland took to the streets for "Global Climate Strike" events aimed at raising awareness of climate change, including some students who walked out of school to take part in the event.

Students at North Hollywood High School poured out of their classes to call for immediate action to reverse climate change.

Despite the calls for students to remain on campus, some opted to leave, most notably at Los Angeles Center for Enriched Studies, where a planned walkout occurred.

Participants in the Global Climate Strike event in downtown Los Angeles began gathering late Friday morning in advance of the midday rally. Hundreds of protesters flooded into Pershing Square, holding signs, chanting and even performing in the streets.

The events around the world ranged from a gathering of about two dozen activists in Seoul using LED flashlights to send Morse code messages calling for action to rescue the earth to demonstrations around Australia that organizers estimated were the country's largest protests since the Iraq War in 2003.

In Paris, teenagers and kids as young as 10 traded classrooms for the streets. The demonstration took on a festival-like feel as bands played and kids danced in a park.

Marie-Lou Sahai, 15, said she skipped school because "the only way to make people listen is to protest."

And in Washington, several thousand young people marched to the Capitol building carrying signs reading "There is no Planet B" and "This can't wait until I finish high school."

"Basically our earth is dying and if we don't do something about it, we die," said A.J. Conermann, a 15-year old sophomore. "I want to grow up. I want to have a future."

The protests were partly inspired by the activism of Swedish teenager Greta Thunberg, who has staged weekly demonstrations under the heading "Fridays for Future" over the past year, urging world leaders to step up their efforts against climate change.

"It's such a victory," Thunberg said in an interview Friday with The Associated Press in New York. "I would never have predicted or believed that this was going to happen, and so fast - and only in 15 months."

Thunberg is expected to participate in a U.N. Youth Climate Summit on Saturday and speak at the U.N. Climate Action Summit with global leaders on Monday.

"They have this opportunity to do something, and they should take that," she said in the interview. "And otherwise, they should feel ashamed."

The world has warmed about 1.8 Fahrenheit since before the Industrial Revolution, and scientists have attributed more than 90 percent of the increase to emissions of heat-trapping gases from fuel-burning and other human activity.

Scientists have warned that global warming will subject Earth to rising seas and more heat waves, droughts, powerful storms, flooding and other problems, and that some have already started manifesting themselves.

Nations around the world agreed at a 2015 summit in Paris to hold warming to less than 3.6 Fahrenheit more than pre-industrial-era levels by the end of this century.

But President Donald Trump subsequently announced that he was withdrawing the U.S. from the agreement, which he said benefited other nations at the expense of American businesses and taxpayers.

Trump referred to global warming as a "hoax" before becoming president. He has since said he's "not denying climate change" but is not convinced it's manmade or permanent.

The U.N. summit is aimed at eliciting concrete proposals from various countries to make progress toward the Paris goal.