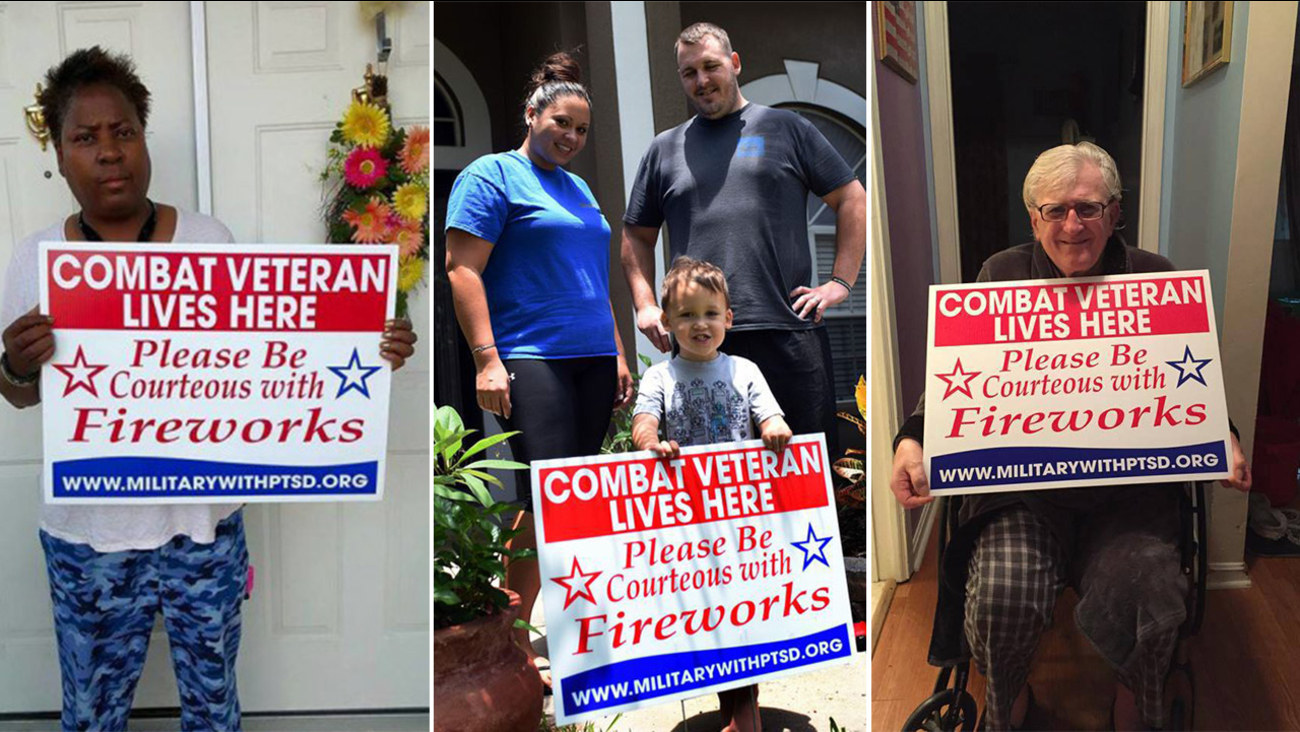 Unexpected fireworks right outside your window can be startling for anyone. For veterans coping with post traumatic stress disorder, the sudden, loud blasts can trigger flashbacks, anxiety or worse.

"Once veterans get in that state, it's very hard to calm them down," said Shawn J. Gourley, executive director and co-founder of the nonprofit Military with PTSD.

In preparation for July 4, Military with PTSD is offering free yard signs to veterans around the country that read, "Veteran lives here. Please be courteous with fireworks."

The U.S. Department of Veterans Affairs said it's important for the families of veterans with PTSD to have a plan when their veteran will interact with fireworks. That's hard to do when the noises go off without warning, Gourley said. The problem is not the holiday itself, when veterans are prepared for the noises, but the week or so leading up to July 4.

"By the Fourth [of July], he's just a raw bundle of nerves," she said of veterans with PTSD.

It's a problem that veterans may have had trouble discussing with neighbors in the past, Gourley said. Although the sign doesn't solve all the problems, it opens up a dialogue on the subject.

"This sign is not a solution at all," she said. "It's not going to fix their PTSD, but it is going to make people aware."

If you see a neighbor with the sign up, Gourley said, you should be courteous by giving them fair warning when you will be setting off fireworks. It's even better if you give them the option of joining the festivities.

With this warning, veterans are able to plan. Gourley emphasized that each case of PTSD is different and that veterans should discuss personalized coping strategies with their doctors. Potential strategies include going camping around the holiday, wearing noise-cancelling headphones during the fireworks and setting off the fireworks themselves.

The sign first gained popularity in July 2014, when one of the organization's members made the sign for himself. When Military with PTSD posted a photo of the sign to its Facebook page, it got hundreds of thousands of shares.

Until this year, the signs were only for combat veterans, but Gourley said they are phasing out the old signs in order to include anyone who might need the sign.

This year, the organization has sent out 2,500 signs, and they received so many donations from the public that the majority of veterans did not even pay for shipping. There are still 2,400 veterans on the waiting list, so donations to the organization continue to help, and Gourley said they're also looking for business sponsors.

Gourley does not want neighbors who see the signs to think that veterans don't want fireworks at all, especially on July 4.

"That is not what this is about," she said. "Nobody wants to stop the fun. We want to start a conversation."

Gourley said it's not the signs themselves that are making the difference, but the conversations they are opening up for veterans with PTSD.

"So many of them, you can see it in their faces, they are so proud of this," she said. "This has given them a way to start speaking."