Hundreds of peaceful protesters flooded streets and intersections in Glendale once again in support of Armenia in its conflict with Azerbaijan over the disputed Nagorno-Karabakh region.
KABC 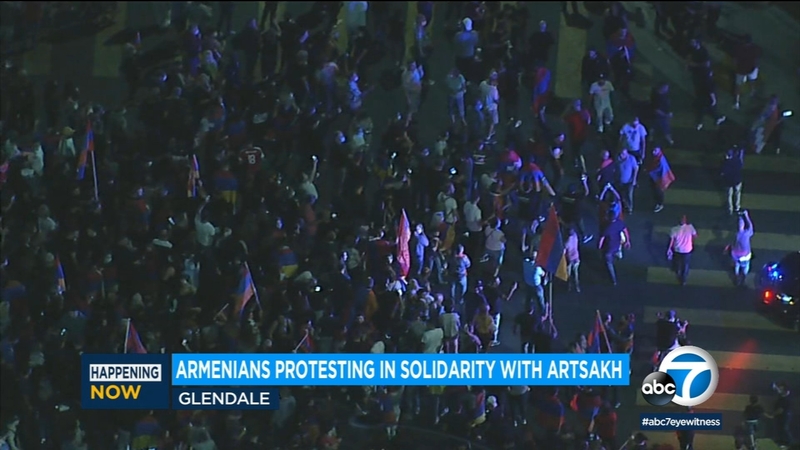 GLENDALE, Calif. (KABC) -- Hundreds of peaceful protesters Monday night flooded streets and intersections in Glendale once again in support of Armenia in its conflict with Azerbaijan over the disputed Nagorno-Karabakh region.

Protesters marched along Glenoaks Boulevard as the massive crowd stopped traffic for more than one hour.

The protest follows other demonstrations over the weekend, which included demonstrators blocking the 101 Freeway in Hollywood and the 170 Freeway in North Hollywood.

The fighting between the two countries erupted Sept. 27 and has killed dozens, marking the biggest escalation in the conflict. Both sides have accused each other of expanding the hostilities beyond Nagorno-Karabakh.

The region of Nagorno-Karabakh lies inside Azerbaijan but has been under the control of ethnic Armenian forces backed by Armenia since the end of a separatist war in 1994.

The U.S. State Department joined France and Russia in calling for an immediate de-escalation to the attacks on the Armenian people.