A sizable group of demonstrators on Sunday briefly took over the 170 Freeway in North Hollywood to support Armenia in its conflict with Azerbaijan over the disputed Nagorno-Karabakh region.
KABC
By Amy Powell 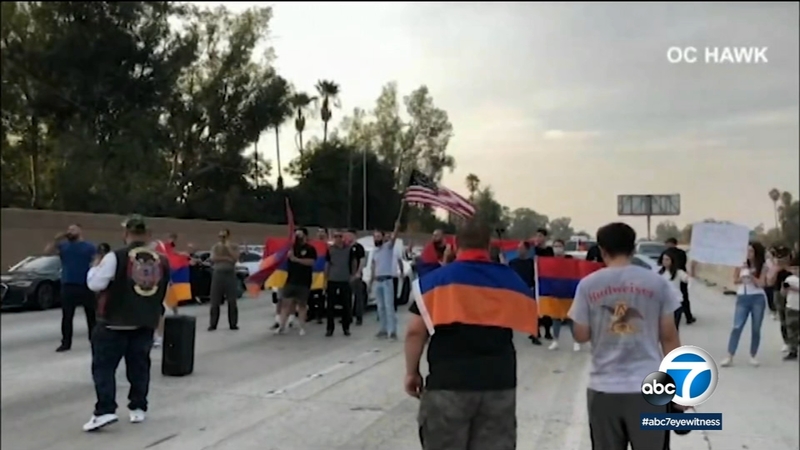 Protesters in support of Armenia briefly block 170 Fwy. in NoHo

NORTH HOLLYWOOD, LOS ANGELES (KABC) -- A sizable group of demonstrators on Sunday briefly took over the 170 Freeway in North Hollywood to support Armenia in its conflict with Azerbaijan over the disputed Nagorno-Karabakh region.

Police shut down both sides of the freeway as the protesters lined up carrying Armenian flags in an effort to draw attention to the escalating violence between Armenia and Azerbaijan.

The protesters say they want more media coverage of the conflict and that blocking roads was a last resort to put a spotlight on it. The California Highway Patrol said lanes reopened shortly before 7 p.m.

Hundreds in support of Armenia were also protesting in Hollywood and marched over the ongoing conflict.

"It goes beyond Armenians. It's about human rights," protester Hovik Yousoufian said. "We have our land. We have a right to be on our land, and no one should take that away from us."

Armenian flags were also held high during another peaceful rally in Glendale, a city known for having the largest Armenian population outside of Armenia.

Azerbaijan and Armenia have been in a bitter dispute for decades over the Nagorno-Karabakh region - both sides blaming the other for the recent surge in deadly fighting.

The clashes erupted on Sept. 27 and have killed dozens, marking the biggest escalation in the decades-old conflict over the region, which lies within Azerbaijan but is controlled by local ethnic Armenian forces backed by Armenia.

On Saturday night, demonstrators gathered on Sunset Boulevard before spilling onto the 101 Freeway in Hollywood, shutting it down for a time.