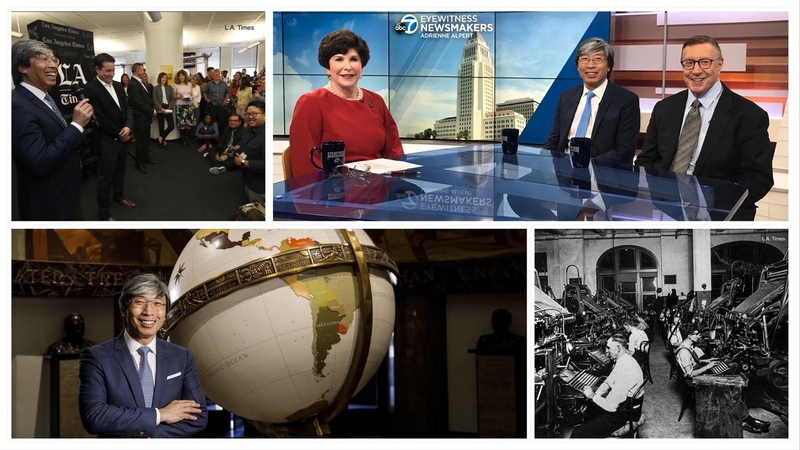 LOS ANGELES (KABC) -- After 18 years of absentee control, the Los Angeles Times is back under local ownership.

The biotech billionaire paid $500 million for the Times and the San Diego Union-Tribune as well as a group of publications.

Pearlstine is a veteran journalist who has helmed Time, Inc., The Wall Street Journal and Forbes.

They said they will increase the Times staff, which has been reduced to 400 from more than 1,000.

Soon-Shiong, who owned a percentage of Chicago's Tronc, the Times' previous owner, said he decided to buy the newspaper after learning the Washington, D.C. bureau would be closed and there would be more layoffs.

Soon-Shiong explained why his decision to buy the newspapers is "deeply personal."

He was born in South Africa during apartheid, after his parents fled China in World War II.

He worked as a runner on the newspaper, a paperboy who ended up owning newspapers.

He remains involved in his biotech research and is focusing on a cancer vaccine.

After the newspaper moves to its new campus in El Segundo, there are plans to include a Times Center for community enrichment.

While the Capital Gazette shooting in Maryland appears based on a personal legal dispute, Soon-Shiong talked about the climate of hostility toward the media.

Not long after President Donald Trump was elected, the newspaper ran a series of critical editorials questioning his whether he is fit to be president.

Pearlstine addressed how to keep opinion separate from news coverage.

Soon-Shiong indicated he would like to see more opinion from both sides of an issue.