It was 1972. The United States was bogged down in the Vietnam War, and then this happened - the "napalm girl" photo. It changed us and our stomach for war.

It earned Ut the Pulitzer Prize. What few people know is Ut came to Los Angeles and continued to take pictures.

He's retiring this month, but only after transporting us to some of the greatest stories of our day.

You may not recognize his name, but you know his work. Ut has spent the last 50 years giving us glimpses of the world we will never forget.

Nick Ut, the prolific photographer who captured the famed "napalm girl" image and gave us glimpses of the best and worst of Los Angeles, announced his retirement.

He spent most of that time in Los Angeles, illuminating iconic stories for the Associated Press. He captured images of the famous to the infamous, Hollywood at its worst and best, riots, fires and earthquakes.

But his story begins half a world away, amid the horrors of the Vietnam War. His brother was a fearless photographer, who was killed on the battlefield.

Ut, who was just a kid, took his brother's place becoming a seasoned journalist. At just 21, he changed the world with the photo we now know as the "napalm girl."

The image of 9-year-old Kim Phuc, whose clothes were burned off her body, exposed us to the innocent victims of war.

"Then I look at black smoke and saw Kim Phuc naked. I don't know her name at that time, but her arms like this," Ut said as he recalled what happened that day. "I keep shooting picture of Kim running."

Ut is largely credited with saving Phuc's life. When soldiers refused to help her, he dropped everything and took her to the hospital.

Today, she calls him "uncle Nicky." They are lifelong friends.

Today, his career is so much more than one photo.

When Saigon fell, the U.S. government helped him escape to Los Angeles.

His first assignment in L.A. was something he knew nothing about.

"When I come to L.A., my editor said go shoot the baseball. I don't know what baseball look like. I saw people run everywhere," Ut said.

He got the hang of it, shooting almost every sport and loving it.

He brought us the mesmerizing O.J. Simpson trial. We saw Robert Blake's relief following the word's "not guilty." Ut transported us to the circus like scene of the people versus the king of pop.

It was Ut who captured Paris Hilton crying in a patrol car on her way to jail - and the joy of her release.

"I had so many media - 80 interviews for that picture. People call me from all over the world and say, 'Hey Nicky, I want your story about Paris Hilton," Ut said.

But his past often returns. The riots of 1992 frightened him.

"It like when I cover war in Vietnam. Black smoke burning, so dark and so dangerous," he said. "I remember one guy hold a gun almost shoot me that day. They yell me they don't want me take a picture."

Like so many from Vietnam, he struggles with PTSD.

"I still have a lot of nightmares about the Vietnam War. Every time a plane flies over my house, sometimes I'm thinking about the bomb, the war in Vietnam."

But to know Ut is to know his smile. He is a happy guy, who loves to take pictures.

His favorite subject is the moon, preferably with a plane flying in front of it. Sound simple? It's not.

He proudly wears a specially engraved camera - a gift from Leica, the brand he used in Vietnam.

It is their unique tribute to a one-of-a-kind photographer. A journalist whose career began in darkness a world away but ends under the bright lights and sunshine of Southern California. 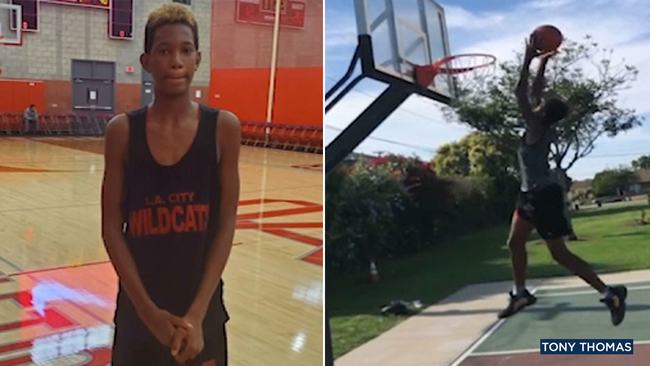