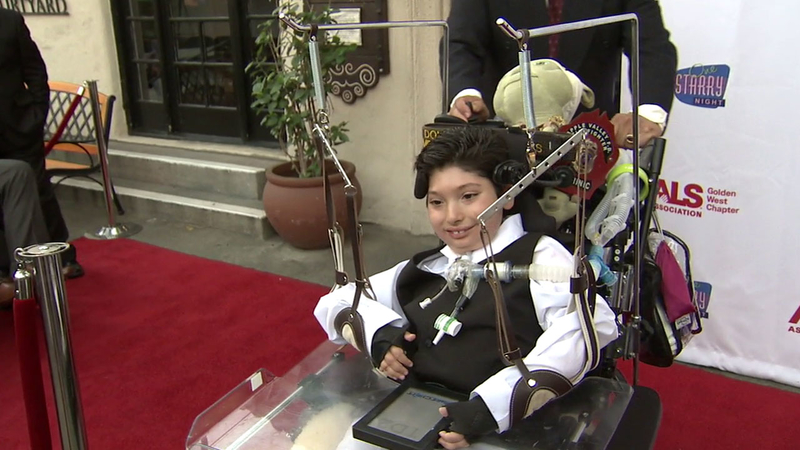 PASADENA, Calif. (KABC) -- A benefit was held in Pasadena Monday night to honor documentaries on and people with Amyotrophic Lateral Sclerosis, more commonly referred to as ALS.

As a New Orleans Saint, Steve Gleason represented nearly perfect physical fitness, but all of that changed when he was diagnosed with ALS.

Gleason's diagnosis came just weeks before his wife Michele discovered that she was pregnant. He then began a video log for his new son. Those videos are now part of the documentary "Gleason," which is in theaters now.

Director Clay Tweel said the documentary shows the "triumph of the human spirit."

"You're watching a guy lose his abilities and lose his motor skills, while his son is on the other side and he's gaining his abilities," Tweel said.

"Gleason" is one of the honorees at "One Starry Night," a benefit for the ALS Golden West Association.

About 14 million people completed the ice bucket challenge in 2014 to raise money and awareness for ALS. The viral videos helped raise more than $115 million, and that money recently led to the discovery of three new genes.

In 2014, Eyewitness News profiled Pilates guru Mari Winsor shortly after her diagnosis. At the benefit, Winsor made an appearance and remains upbeat.

"I still am able to be with the man I love and to do what I love to do," she said.

Apple Valley resident Dominic Cumo is 12-years-old and lives with ALS. But his motto is to never give up.