#DeAndresJourney: Texas HS student shows off his dreads on the red carpet

KABC
By Chauncy Glover
LOS ANGELES, California -- ABC anchor Chauncy Glover flew out to LA, alongside DeAndre and his family, to document every step of his Oscar debut and his #HAIRLOVE journey! 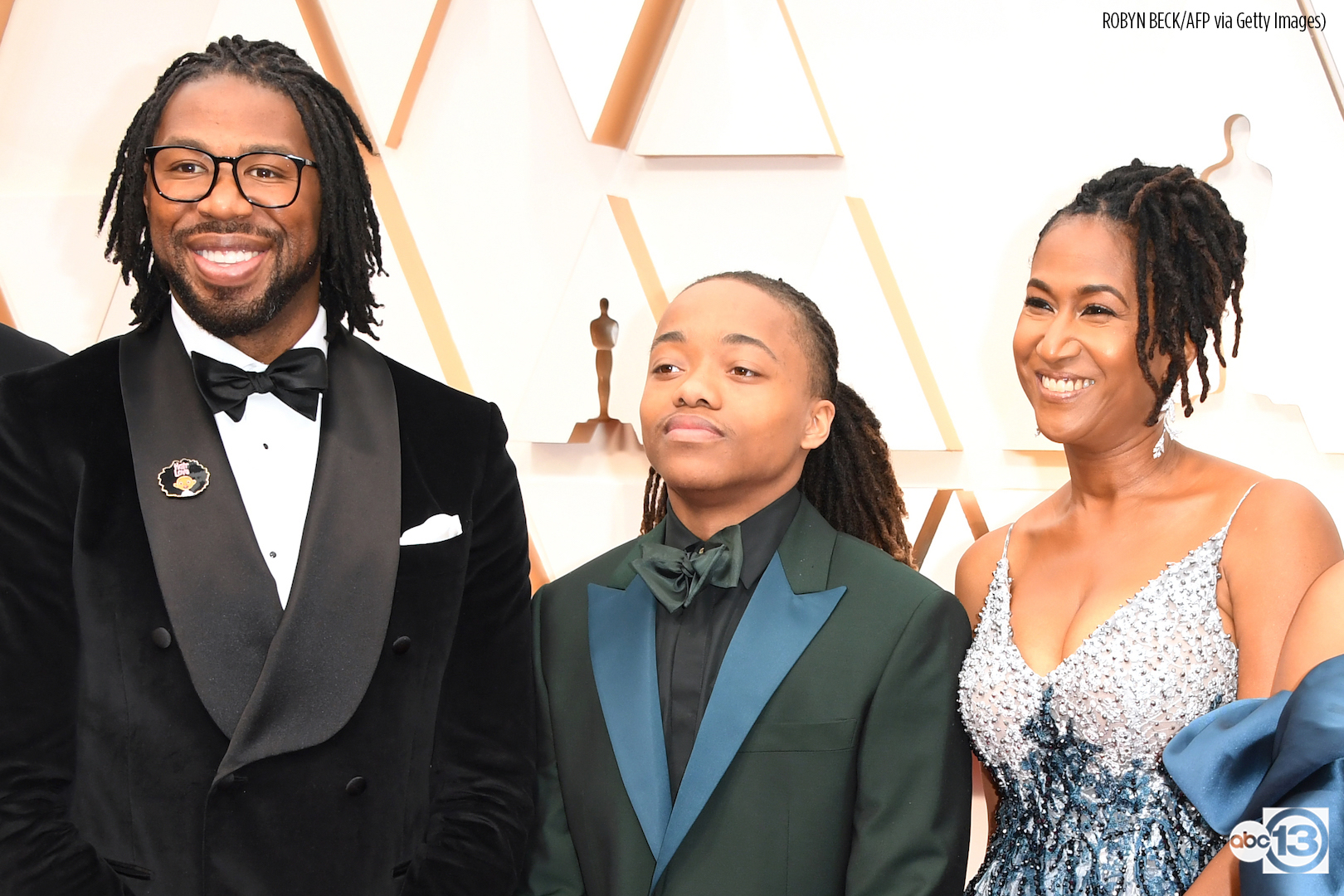 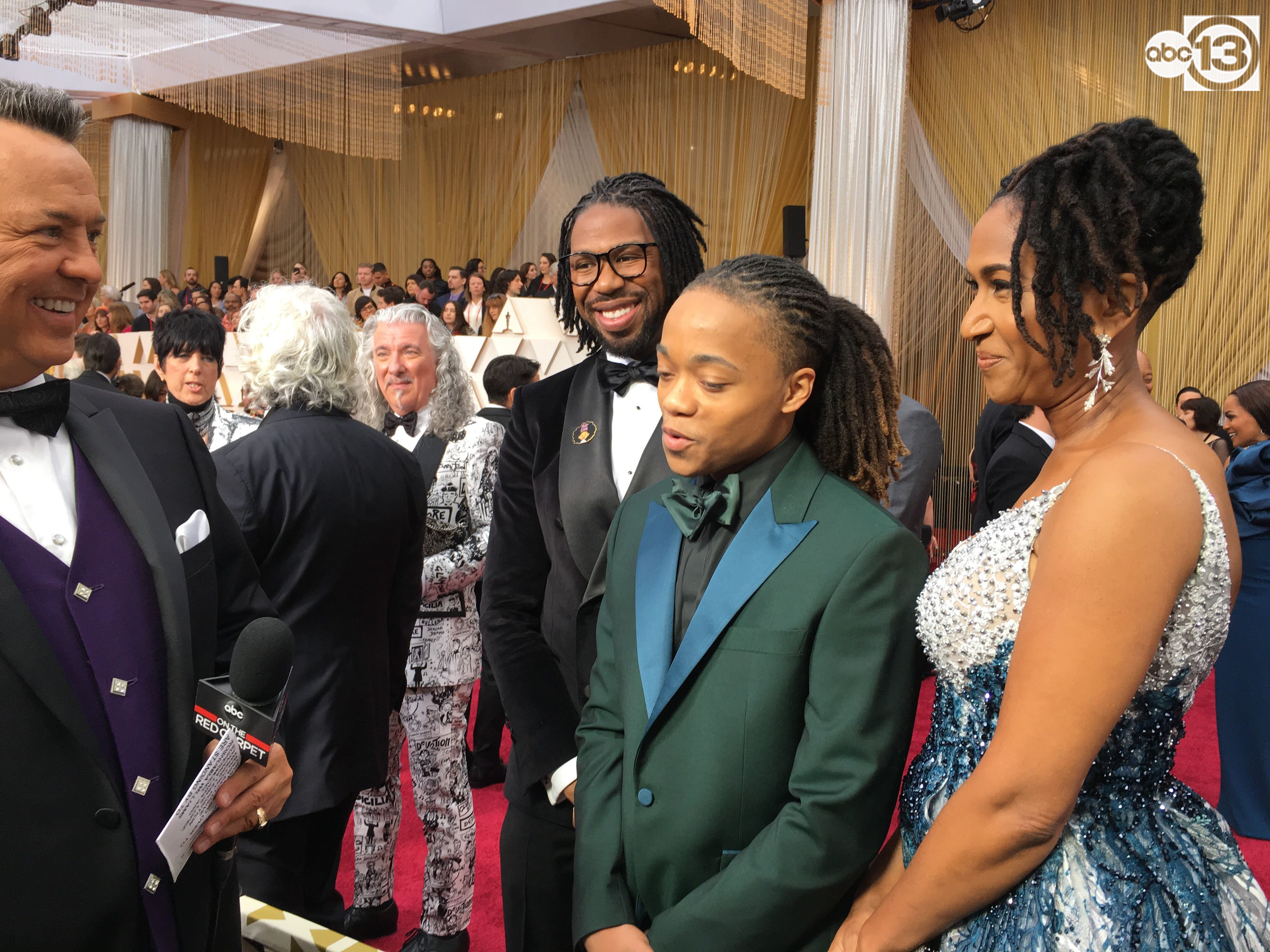 HOUSTON!! Y’all look at how good
DeAndre and his mom look! Today he told me at the hotel, “I really wanna make people in Houston proud of me. Dreads and all.” #Oscars #redcarpet #DeAndresJourney #HairLove @abc13houston @MatthewACherry @Dove @HairLoveShort @TamronHallShow pic.twitter.com/h9zpiRlBQb

The time is winding down! DeAndre Arnold is just moments away from walking the red carpet

Day 4: And the Oscar goes to, Hair Love! .... DeAndre immediately texted me saying he was on top of the world and he just could not believe it but mainly he was grateful that a negative situation has turned into something positive. DeAndre is settling in very well at his new high school and he's looking forward to graduating and walking this spring. Now he is trying to decide which college he wants to attend. He has several college scholarship offers on the table. He plans to continue to champion to help bring the Crown Act to Texas and other states.

He had the biggest breakfast this morning!! It all still feels like a dream this morning.

DeAndre says he still can’t believe it. The world knows his name & his story. “I never thought it would get this big. Just thought we would work it out. But I’m glad I stood up for myself and a negative turned into something positive,” he said. #HairLove #abc13 #DeAndresJourney pic.twitter.com/QA8dltsHPb

Day 3: "I see why DeAndre made the decision not to cut his locks when school officials told him they were too long and did not meet the district's dress code policy. This kid loves his "crown," as he calls it. We were up early this morning starting to prep for the day. A hairstylist spent her morning twisting DeAndre's locks making sure they looked very well groomed and fresh once he gets on the red carpet. He sat in the chair patiently talking with the hair dresser about how long it took him to grow his hair out and how meticulous the process is to keep it looking healthy. His mom is also enjoying the process. She spent the morning and make up and hair in the next room over. At times DeAndre seems overwhelmed and still surprised all of this is happening to him. He's also very appreciative to Dove who's picking up the tab on all of this. I asked him if he thought it would have just been a lot less stress and way easier if he would have just cut his hair to meet the districts guidelines. And he said he would go back and make the same decision to stand up for what he believes in. Time now to get him in this tux and head out!

Meanwhile- my photographer Noe and I went to see how close we could get to Hollywood Boulevard as they are putting on the final touches before stars are set to arrive for the Oscars. Most of the roads around the Dolby theater are all blocked off people have been here since last night claiming their spots here on the side just so they can get the perfect position to see their favorite celebrities."

From the walk of fame, to celebrity stylists, it's safe to say that DeAndre is enjoying LA.

Day 2: ""DeAndre, welcome to Hollywood. You have arrived," yelled a character on the Hollywood Walk of fame. Hanging out DeAndre most of the day-I gathered, he is very shy and low-key and really hates a lot of attention. "I'm really not used to all of this. I normally keep to myself," he said. But, he's also getting used to his new found fame and just enjoying. Saturday was a long day though. Dove is making all of this happen! Wardobe. He met with stylists, trying to find the perfect tux...and he did! This young man is also very grateful for this once in a life time opportunity. But, he also understands there are people out there who ask, "Why didn't you just cut your hair?" He told me, "I have nothing to say to the critic's because I don't focus on all the negative in the world I like to focus on the positive and I'm getting way too much support to worry about a couple of critics. Hopefully, I'm the catalyst for more cultural acknowledgment and less cultural ignorance. That's my goal here," he said." He's extremely close with his parents. Honestly, I can't tell if he's a "mamma's boy" or a "daddy's boy." We ate pizza. He asked me questions about being a journalist. He loves animals and wants to be a vet. This kid is certainly having a senior year to remember!! "I can't wait until tomorrow," said DeAndre. I asked him if he could meet anyone tomorrow on the red carpet. "It would be Will Smith. I've been watching him all my life, all of his movies, so if I see him I may have a heart attack.""

ABC13's Chauncy Glover is following DeAndre Arnold throughout LA for his Oscars debut!

Getting #Oscar ready and having the time of his life! This kid is gonna look like a million bucks on the #red carpet tomorrow night! #DeAndresJourney #abc13 #dove #HairLove #paulsmith @MatthewACherry @13PhotogNoe pic.twitter.com/GiOGtj7lt7

Day 1:"DeAndre Arnold is on cloud 9. We woke up early this morning and headed straight to a famous style studio here in LA. DeAndre was fitted for an awesome tuxedo to rock on the red carpet tomorrow. He loves everything from the bow-tie, to the shoes, to the color of the suit. He is going to kill it on the red carpet tomorrow at the Oscars! This kid from Texas has become a star in his own right. Even walking down the street here in Los Angeles, people know him and they know his story and they congratulate him on standing up for himself by telling his school he would not cut his dreadlocks. Headed to grab some lunch now and then carry on with a busy schedule. DeAndre's parents are here too and his Mom just can't stop crying and getting emotional for her son. A negative situation has turned into more positivity than they ever imagined!
Stay tuned.

When the name DeAndre Arnold began circulating after he was suspended from a Barbers Hill High School in Mont Belvieu, he would have never imagined becoming a modern-day social activist.

DeAndre was the center of controversy after he claims his high school prohibited him from wearing dreadlocks past a certain length. The school allegedly threatened him, saying that he would not be allowed to walk across the stage for graduation.

Several celebrities like Gabrielle Union and Dwayne Wade, heard his story and decided to take matters into their own hands. Hundreds of positive comments flooded DeAndre's social media accounts, encouraging him to maintain the length of his hair, which he says he has been growing out for quite some time.

This is the full video we sent Deandre @itsgabrielleu @DwyaneWade @Dove pic.twitter.com/kcW288b6JY

Ultimately, DeAndre was invited to attend the Oscars, courtesy of the team behind who won for their animated short film "Hair Love."

Matthew A. Cherry, who wrote and directed the animated short film "Hair Love," said his Oscar was for all the stories like DeAndre's.

Deandre even got a shout out during the Oscars from the director during his acceptance speech.

Matthew A. Cherry and the Hair Love team take home the Oscar for animated short film

"Hair Love" tells the story of an African-American dad who must learn how to style his daughter's hair.

Matthew A. Cherry, the writer and co-director of "Hair Love," tweeted that he, Gabrielle Union and Dwayne Wade were inviting the teen, Deandre Arnold, to the show as their special guest.