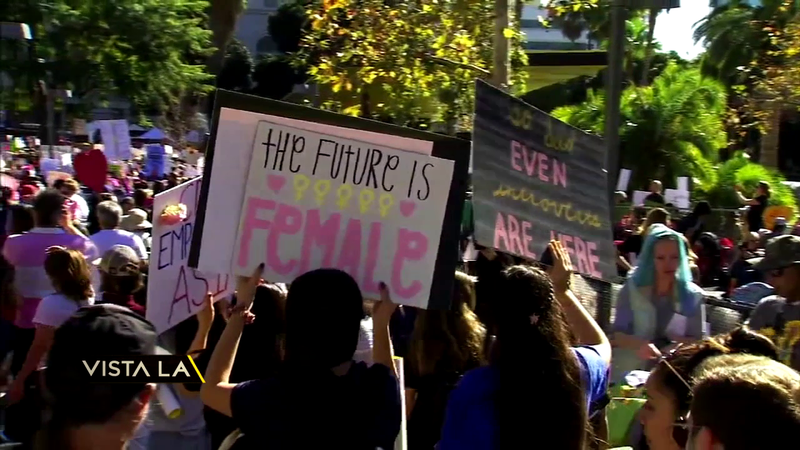 LOS ANGELES, Calif. (KABC) -- It take courage, resilience, and passion to spearhead the largest women's march in the nation.

"There's power in numbers. There's power in women, I mean, women did this. It was really important that we all came together, for that one day but then what happened after the march was that we got politically active," Guereca said.

Inspired by a march held in Washing, D.C., Guereca started a Facebook Group page with other women to organize a march in Los Angeles. She felt L.A. needed their own demonstration of democracy, so in 2016 she founded the "Women's March Foundation."

With many years of professional event planning and community organizing experience, she thought a small group of women activists would show up, but never did she expect 750,000 to takeover the streets of Los Angeles.

"When I look back at 2017, I can tell you that I was naive, " Guereca said. "I thought I was organizing my community, I thought we were going to come out and protest and maybe 100 of us. I ended up with 750,000 people here in the streets of L.A., and organized the largest women's march in the nation."

When it comes to women's issues, Guereca says it's not about forcing ideologies on others, it's about respect and having a choice.

A self-starter since she was a young girl, Guereca understands the importance female role models can have on the next generation.

"It's planting that seed and that as a little girl, you can be in the political scene, you can be in the leadership position. If I look back at my trajectory, I was the first girl in my family to attend university. I was the first girl to move out to go to university," Guereca expressed. "So I do this it's important that everyday people communicate and bring these girls up into leadership. So do-ers are change-makers!"

As a trailblazer for women's rights, Guereca believes every step has a bigger impact when women come together.

"It's important to come out and march but it's what happens after the march that keeps us going. I think women have stepped forward but I also think that as Latina women, of women of color, we still need to push in order for us to be seen in 2020, Guereca said passionately. "I would love to see a female president, but unless we push, ask for it and fund it -- we won't see it."