Vigil held for man who became homeless, had heart meds taken in a sweep and died of heart attack in Koreatown 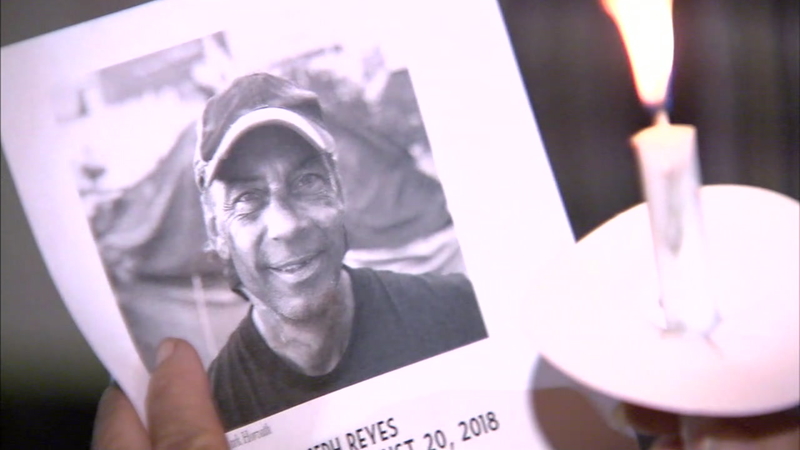 KOREATOWN, LOS ANGELES (KABC) -- Koreatown residents held a vigil for a man named Joe Reyes, who was evicted from his apartment, lost his heart medication when his homeless encampment was cleared and died of a heart attack last week.

Reyes was evicted after the rent was raised by new ownership and ended up living on the streets. The encampment where he lived was cleared twice this summer by teams from the city, including the LAPD and sanitation.

"He was just so devastated because this was everything, everything that he owned. The only things that he had remaining were just the clothes on his back and whatever he had in his backpack. So, they took his heart medication, they took his whole tent," Jane Nguyen said.

Nguyen, who is with the group Shelter for All Koreatown, knew Reyes well. She first met him handing out water at his encampment during a heat wave.

"He was so motivated to get off the streets and into housing. All he wanted was to be in a home with his cat," she said.

But last week, Reyes died of a heart attack. Nguyen said she doesn't know the role of him not having his medication may have played in his death. She said Reyes was overwhelmed by the stress of the sweeps and living on the street.

"He's a lifelong resident of Koreatown, and I just feel like it can happen to anyone. The city of L.A. has declared homelessness an emergency, and yet stuff like this is happening all the time," resident Lorraine Kumpf said.

Councilmember Herb Wesson, who represents Koreatown and attended the vigil, said the city needs to do better.

"The police department and the new chief recognizes that we need to do better," he said. "To help people like Joe, it's going to take the public to change the mindset of the public."

Wesson went on to say that Koreatown is closer than ever to having a large homeless housing facility with medical services.

"I think if Joe would have had a place to stay, it would have saved his life," he said.

Those who attended the vigil said there have been and will continue to be stories like Joe's until emergency shelters are ready to open.

A group of USC Annenberg graduate students produced a documentary about the homeless population in Koreatown.