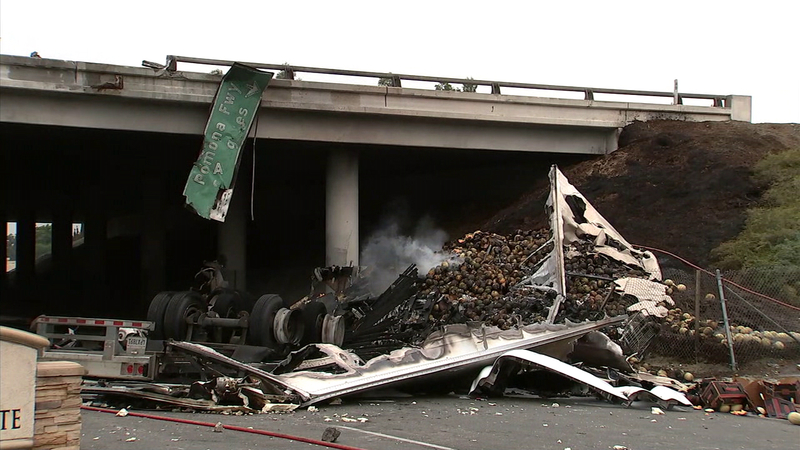 SOUTH EL MONTE, Calif. (KABC) -- Two drivers were killed in a fiery crash Sunday morning when a semi-truck and BMW collided on the 60 Freeway in South El Monte, sending the big rig over the side and onto the street below.

The collision happened about 4:30 a.m. near Peck Road, prompting the closure of the street and all eastbound lanes on the 60, according to the California Highway Patrol.

Investigators said both vehicles erupted in flames after the semitrailer slammed into the BMW from behind. It was unclear whether the BMW had slowed in a traffic lane or completely stopped.

A witness said the truck driver blared that vehicle's horn before the impact.

"That's what a lot of motorists don't understand - they cannot stop as easily as a vehicle does," said CHP Sgt. Eddie Perez, comparing big rigs with ordinary cars and trucks. "So for them to slow their speeds down, to try to avoid or swerve, it's almost nearly impossible - especially if it's dark, it happens to be in front of them. So they can't easily maneuver around as, let's say, a simple four-door sedan would."

Both drivers were pronounced dead at the scene, the CHP said. Their bodies were burned so badly that first responders could not determine whether they were male or female.

The incident left the semi overturned on Peck and its payload of cantaloupes strewn across the crash site. The other burned-out vehicle remained on the freeway, whose guardrails were melted by flames.

One lane was later reopened on the 60, but traffic remained backed up as far as Rosemead Boulevard.