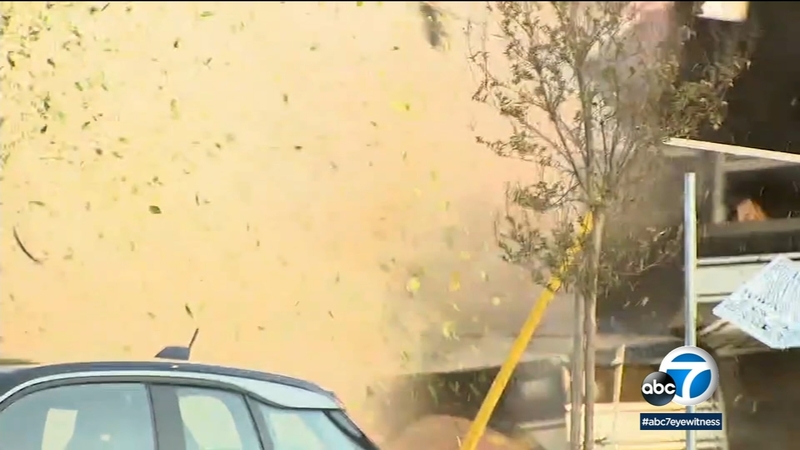 SOUTH LOS ANGELES (KABC) -- What was supposed to be a safe operation to destroy a cache of illegal fireworks turned into a "total, catastrophic failure" of a Los Angeles police bomb squad vehicle that resulted in a massive explosion in South L.A., rocking a neighborhood and injuring 17 people, including 10 law enforcement officers, authorities say.

Among the injured in Wednesday's blast included a Los Angeles Police Department officer and an ATF agent.

The bomb squad truck remained on the street in the 700 block of East 27th Street near San Pedro Street Thursday as a national Bureau of Alcohol, Tobacco, Firearms and Explosives team arrived to conduct their investigation.

"This was completely unexpected. They followed all the protocols in place. It was not really one of these explosions that was unplanned. This was planned," LAPD Lt. Raul Jovel said at a press conference.

The material exploded inside an iron containment vessel on a tractor-trailer Wednesday night, tearing the rig apart.

"They had 10 pounds of explosive device substance that they put in there. This truck is rated for a lot more pounds than that -- at least 15 pounds -- so all protocols, training was followed," Jovel said. "We're not sure what happened. This vehicle came apart, literally."

Officials say the material being inside the LAPD truck made the blast more dangerous.

"You get a pressurized explosive, that pressure has to go somewhere. When you have it in the open, it tends to disperse evenly. You have that environment where it's pressurized, it needs to find an outlet. It certainly found an outlet here and it just created that pressure wave," Jovel said. "If some of these devices were to explode in the open, the impact would be a lot less because the blast would really go in all directions."

The blast, which happened shortly after 7:30 p.m. Wednesday, sent nine police officers and a federal Bureau of Alcohol, Tobacco, Firearms and Explosives officer to the hospital with minor injuries, Fire Chief Ralph M. Terrazas said. Homes, cars and a laundromat had windows shattered, and one car had its side plowed in and was knocked on its side by the force of the blast, which was heard two blocks away.

Six civilians, ranging in age from 51 to 85, were taken to the hospital, three with minor and three with moderate injuries, and one person was examined at the scene but wasn't transported, fire officials said.

Several homes in the area were also damaged, and city officials were evaluating them to determine if they were structurally sound.

Earlier in the day, the LAPD seized at least 5,000 pounds of illegal fireworks from a home near an elementary school. At a news conference Wednesday night, LAPD Chief Michel Moore said work was being done throughout the day to move illegal commercial-grade fireworks to an offsite location.

In the wake of a massive explosion during a planned detonation of illegal fireworks in South L.A., some students of a nearby elementary school say they're on edge.

During the operation, 40 coke-can-sized improvised explosive devices with fuses and 200 additional smaller devices with similar construction were found. The material was transferred to a "total containment vehicle" with an iron chamber, which is designed to house explosive material that can be safely detonated.

When the items were detonated, Moore said there was a "total catastrophic failure of that containment vehicle."

"Clearly, protocols were followed and pursued, but something happened in that containment vehicle that should have not happened, and we don't know why, but we intend to find out why," Moore said.

Residents told Eyewitness News they felt the blast from inside a building more than a quarter-mile away.

"I was asleep when I felt like the whole bed was shaking. It felt like a really hard earthquake," one resident said. "It sounded huge."

"Everybody started running, and I couldn't find my mom... Everybody was screaming, going crazy," said 14-year-old Maricela Cortes, who was near the blast with her mother and 6-year-old sister.

The LAPD seized at least 5,000 pounds of illegal fireworks from a South L.A. home Wednesday afternoon.

Police say they discovered the massive cache at a home on 27th Street after Newton Division officers received a tip.

A bomb squad was called to the scene to secure and remove dozens of boxes filled with fireworks, which were set to be hauled away and destroyed with the help of Cal Fire.

One man, identified as Arturo Cejas III, was arrested on suspicion of possessing a destructive device, but he also may face charges of child endangerment because his 10-year-old brother was in the home, Moore said.

"We understand that this explosive material was acquired out of state and transported here for the purposes of reselling it to community members and neighbors," Moore said.

The explosion prompted police to evacuate nearby residents. Prior to the blast, only two homes had been evacuated.

"I would expect multiple houses destroyed had those explosives gone up," LAPD Capt. Robert Long told Eyewitness News before the explosion.

Authorities said the blast illustrated the dangers of underground pyrotechnic sales. In March, a fireworks explosion at an Ontario home killed two people.

The American Red Cross is set up at Trinity Park, 2415 Trinity St., to provide affected residents with food, clothing and other needed services.