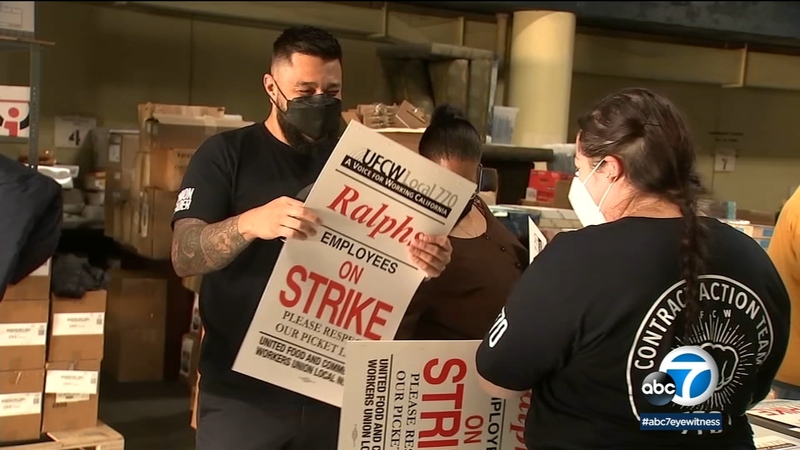 LOS ANGELES (KABC) -- Shoppers could see a possible strike at the major supermarket chains after nearly 50,000 union workers voted to authorize a walkout.

Members of the United Food and Commercial Workers (UFCW) have been preparing picket signs after contract negotiations with Ralphs, Pavilions and Vons stalled. The current contract expired March 7.

Workers say they were forced to authorize a strike after the grocery store chains refused to return to the table. Pay is the biggest sticking point in negotiations.

"The company is only offering .60-cent yearly wage increases," said Pio Figueroa who works at Ralphs. "So what would be a $1.80 over three years, which is just laughable."

The UFCW is seeking a $5-per-hour wage hike, along with increased safety standards and increased staffing.

Union members say it was their hard work and sacrifice on the front lines during the pandemic that helped the grocery chains make billions in profits, while many of the workers struggle to stay afloat.

"Fourteen percent of us are homeless or live in our cars, the rest of us struggle to pay rent and buy groceries," Ralphs grocery worker James Peet said. " And .60 cents doesn't even cover the cost that eggs increased,".

Thousands of grocery workers across SoCal have voted to authorize their union to call a strike amid continued contract negotiations with the owners of stores including Ralphs and Vons/Pavilions/Albertsons.

Ralphs said in a statement:

"Our proposal invests $141 million in new wages and prevents increases in health costs. This is a serious commitment by Ralphs to Southern California and to our exceptional associates"

While workers say they hope it won't come down to strike, they say they are prepared to walk in order to fight for terms.

After the strike vote authorization was announced, both sides agreed to resume negotiations on Wednesday.