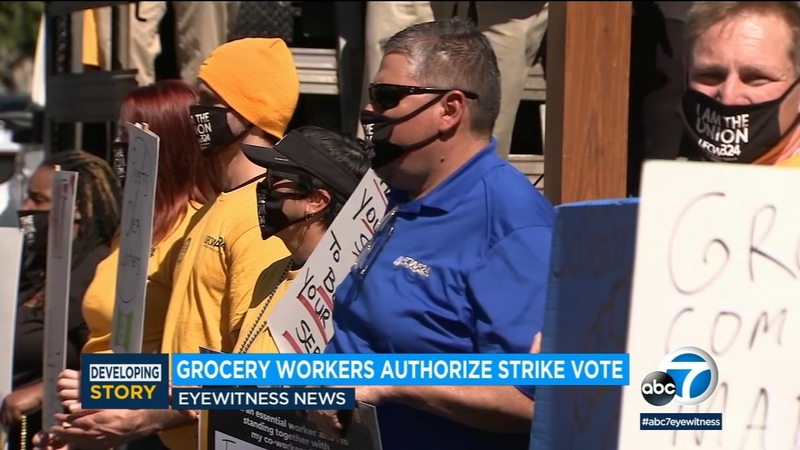 The union representing grocery store workers in Southern California supermarkets said Thursday it had authorized a strike vote as contract negotiations with the owners of Ralphs and Vons/Pavilions/Albertsons have stalled.

The local is one of seven representing some 60,000 grocery workers in more than 500 stores from the Central Valley to the Mexico border. Talks have stopped, Rodríguez said.

A 3-year-old labor contract between the unionized grocery workers and Southern California supermarkets expired on March 7, raising fears of a possible strike.

Thousands of grocery workers in SoCal are working without a contract after their most recent one expired at midnight, raising fears of a possible strike as negotiations continue.

"Bargaining committees composed of frontline grocery workers and union leaders came prepared with proposals that would fairly increase wages and improve store conditions to reflect the needs of workers in a pandemic and post-pandemic world," the union said in a statement Thursday.

"The corporations representing the stores offered pennies, a proposal that would ultimately be a pay cut due to inflation."

Following the union announcement, Ralphs issued a statement Thursday saying, "a strike authorization vote doesn't mean a strike will happen, but it does create unnecessary concern for our associates and communities, at a time when we should be coming together in good faith bargaining to find solutions and compromise. At Ralphs, we remain focused on settling a deal with the UFCW."

The company statement added: "We have three very clear objectives; to put more money in our associates paychecks, keep groceries affordable for our customers and to maintain a sustainable future for our business. By working together, we win together."

Last week, the union posted a message on Twitter saying that despite the failure to reach an agreement, the terms and conditions of the previous contract are still in effect.

"When we began negotiations with Ralphs and Albertsons/Vons/Pavilions in January, we came prepared with comprehensive proposals and a clear path toward negotiating a contract that reflects your value and the sacrifices you have made," the union said last week in a series of tweets to its members.

"We are disheartened to inform you that Ralphs and Albertsons/Vons/Pavilions squandered the unique opportunity to propose a contract with better wages and benefits in a time of immense profit. They have failed."

When we began negotiations with Ralphs and Albertsons/Vons/Pavilions in January, we came prepared with comprehensive proposals and a clear path toward negotiating a contract that reflects your value and the sacrifices you have made.

At the time, Ralphs issued a statement saying its stores will remain open and staffed even though the labor contract expired.

"It's unfortunate that substantial progress toward reaching an agreement was not made during our 12 total days of bargaining with the union," said Robert Branton, vice president of operations at Ralphs. "While the company made several wage proposals, the union continues to propose very costly items which impacts our ability to meet customer needs and remain competitive.

"Negotiations are a process, and we're committed to reaching an agreement no matter how long it takes," Branton added. "We are hopeful the union will return to the bargaining table with renewed interest in reaching a balanced agreement."

From 2003 to 2004, Southland grocery store workers walked off the job over a contract dispute, and the strike lasted 141 days. That work stoppage was estimated by some analysts to have cost the supermarket chains as much as $2 billion, with the workers losing $300 million in wages.

During the last round of negotiations in 2019, grocery workers voted to authorize a strike, but negotiations continued for two months, and a labor deal was eventually reached, averting a walkout.