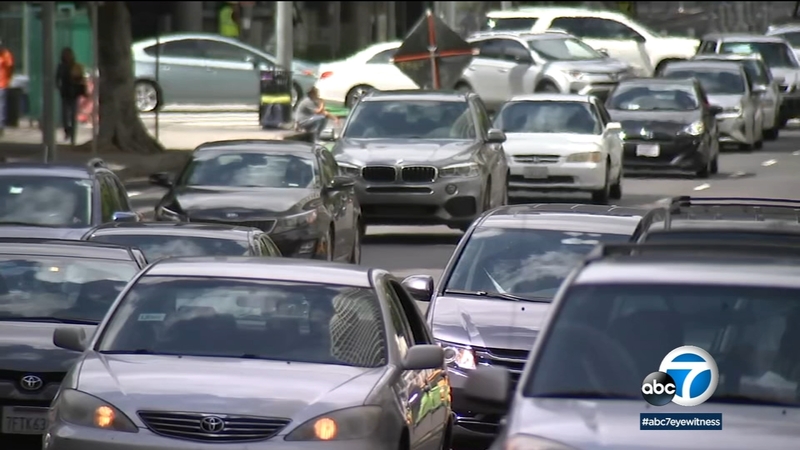 LOS ANGELES (KABC) -- If you think the streets are more congested you're right. Southern Californians spend 128 hours in congestion every year, and yes there are more cars out there. Between 2000 and 2015, we added 2.4 million people and 2.1 million cars. That's almost one car per person.

"Now the reason that's significant is the decade before that, it was a quarter of a car to one person," said Kome Ajise from the Southern California Association of Governments.

Officials say there's been a drop in mass transit ridership, and a new UC Berkeley study says as people use ride sharing apps such as Uber and Lyft, traffic is getting worse.

"There's been an increase in congestion in the San Francisco area, and two-thirds of that increase was as a result of the transportation network companies or TNCs, Uber and Lyft," Ajise said.

"Certainly there is a market for people who can afford Uber and Lyft and are now using that instead of mass transit. The bigger issue for us is actually that Uber and Lyft are clogging the streets on which our buses run and our buses carry most of our passengers," said Joshua Schank from the MTA.

Uber issued a statement which says, in part:

"While studies disagree on causes for congestion, almost everyone agrees on the solution. We need tools that help ensure sustainable travel modes like public transportation are prioritized over single occupant vehicles."

"The study in question overlooks notable contributors to congestion, including increased commercial deliveries and tourism growth."

One possible solutions officials are looking into is a concept called congestion pricing, where they would levy a charge on vehicles when they enter a certain area or zone such as downtown Los Angeles or West Los Angeles. The Southern California Association of Governments ran a test program where it would cost $4 to drive into the area.