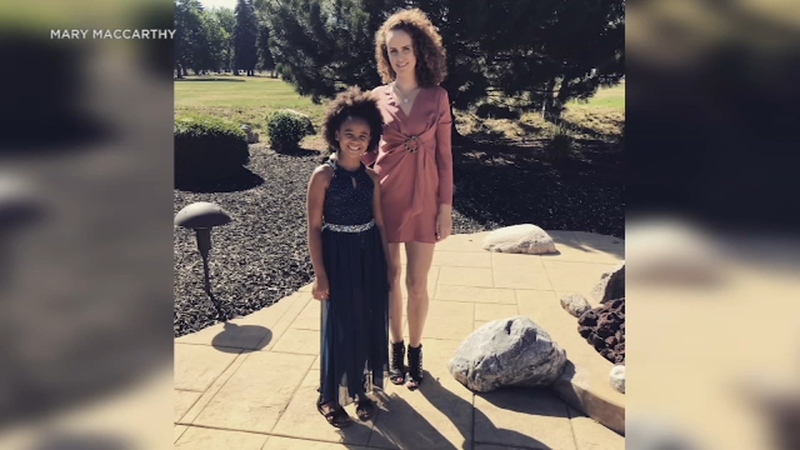 LA mother says she was accused of trafficking her biracial daughter

A Southern California woman is accusing Southwest Airlines of racial profiling, saying she was accused of human trafficking while traveling with her biracial daughter.

Mary MacCarthy of Los Angeles says she and her 10-year-old daughter, Moira, were flying to Denver on Oct. 22 after receiving news that MacCarthy's brother had suddenly died the day before.

On their connecting flight in San Jose, MacCarthy says the flight attendants told her she couldn't sit with her daughter because there were only middle seats available.

"So with their permission I asked other passengers if they would kindly move so we could be together, especially as my daughter was grieving, and they did. People are nice," she added.

When they arrived in Denver, MacCarthy said, she and her daughter were met on the jetway by two Denver police officers.

"When the police and the Southwest representative...told me that we had been reported for alleged suspicious behavior, that's when things clicked in my brain that maybe we had been racially profiled," she said.

MacCarthy captured the interaction on video, in which the representative is heard saying that flight attendants had been concerned about their behavior when they boarded but that they weren't "suspecting anything."

She later learned that quite the opposite was true. Denver police told her they were responding to a report from a Southwest Airlines flight attendant of a possible human trafficking.

MacCarthy has now retained an attorney and wants the airline company to take action to ensure no other families encounter the same treatment.

"We had the police called on us for a very serious crime in a context that was deeply traumatizing to my daughter," she said.

"I gave the airline plenty of time to contact me and apologize -- over two weeks later, I've yet to receive anything more than two brief automated responses. The time for an apology is long past."

In her email to Southwest's media team, MacCarthy said she wanted a written apology from the airline, immediate reimbursement of the full price of their tickets, and "additional compensation to account for the trauma imposed on an innocent family, and especially on a grieving ten year-old Black girl."

Southwest Airlines said it is "disheartened" by MacCarthy's account of the events and plans to reach out to her.

"We are conducting a review of the situation internally, and we will be reaching out to the Customer to address her concerns and offer our apologies for her experience traveling with us. Our Employees undergo robust training on Human Trafficking. Above all, Southwest Airlines prides itself on providing a welcoming and inclusive environment for the millions of Customers who travel with us each year," Southwest Airlines spokesperson Dan Landson said in a statement to CNN on Sunday.